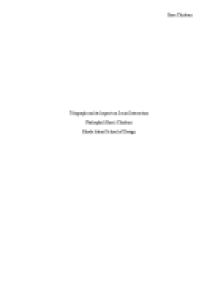 The Development of the Telegraph and its Social Impact

﻿Bom Chinburi Telegraph and its Impact on Social Interaction Phakaphol (Bom) Chinburi Rhode Island School of Design ________________ Telegraph and its Impact on Social Interaction Introduction Competition was fierce, and not only from the many companies using the electromagnetic technology and the Morse code. In the early years, optical telegraphs were a competing technology. Though visual sighting is a form of instantaneous communication over long distances that has been around as long as there have been human societies, the messages transmitted were severely limited. Smoke could signal trouble with an invading enemy, but little more. In France in 1791, Claude Chappe developed an optical device for signaling over distances and named it the telegraph from the Greek for "far writer." A noted clockmaker devised a system of pulleys and rotating arms that enabled the operator to position the large viewable arms.[1] Napoleon Bonaparte, who came to power in 1799, ordered an extensive network of optical telegraphs built. Chappe evidently had enormous plans for a network of telegraphs across Europe. By the 1830s, lines of optical telegraph towers stretched across much of Western Europe. ...read more.

The telegraph was frequently financed by the sale of subscriptions to ordinary individuals who lived in communities that would benefit from a telegraph. One unintended consequence of the invention of the Morse code was that it stimulated a competing optical telegraph technology: the heliograph that was invented in 1865.[4] The heliograph was a means of sending signals using reflected light. If you have ever seen a movie about naval battles during World War II, you have seen the heliograph in action. Though the use of reflected light was a means of signaling used by the ancients, it was the universal acceptance of the Morse code that stimulated the expansion of this technology. Impact of telegraph on social interaction and culture The telegraph had an enormous impact on culture. Prior to the telegraph, time in the United States was not standardized. Western Union, together with the federal government, was "responsible for applying telegraphic technology to time, standardizing it and disseminating it across the entire United States".[5] The Time Service branch of Western Union was a cooperative effort of the United States Naval Observatories in Washington, D.C. ...read more.

Conclusion According to Field, the telegraph and the railroad did more than any two other inventions to bring finance into the modem world: the telegraph because of the speed of communication and the railroads because of the need for large amounts of financing. In the nineteenth century, there were between 200 and 300 stock exchanges, but only a few persisted after the spread of the telegraph.[7] Investment bankers originated securities issues, but the secondary markets were crucial for liquidity of the securities. According to Field, the primary effect of the telegraph on secondary markets was to lower prices and increases the peak load supply of rapid execution and confirmation of transactions. In 1887, a telegram ordering a trade could be sent domestically, and confirmation of execution, could be received within one and a half minutes. In 1894, a similar transaction across the Atlantic could take less than four minutes, and by 1909 three minutes. By 1920, a trade between a San Francisco brokerage house and a correspondent firm in New York or Chicago could execute and confirm a transaction in as little as 56 seconds. The telegraph increased the real resources consumed by the brokerage industry, did little to attenuate the periodic volume booms, but did not reduce the volatility of share prices. ...read more.