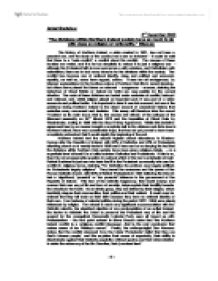 'The divisions within Northern Ireland society have as much to do with class as religion or nationality' Discuss.

3rd December 2003 'The divisions within Northern Ireland society have as much to do with class as religion or nationality.' Discuss The history of Northern Ireland, a state created in 1921, has not been a peaceful one, and the study of the country has been as turbulent - it could be said that there is a 'meta-conflict'; a conflict about the conflict. The causes of these troubles are varied, and it is far too simplistic to reduce it to just a religious one - although the Protestant faith is now synonymous with unionism, and Catholicism with nationalism, there are in fact many reasons for the divisions within the society. The conflict has become one of national identity, class and political and economic equality, as well as, some have argued, culture. These are all endogenous, i.e. internal, explanations for the fractious nature of Northern Irish life in recent decades, but others have placed the blame on external - exogenous - sources, claiming the behaviour of Great Britain or Ireland (or both) are responsible for the current situation. The roots of these divisions are buried under centuries of conflict, betrayal and mistrust, and, whilst religion played an important part, it was part of a wider economic and political battle. It is important to take these into account, but one of the problems facing Northern Ireland is the sheer amount of unresolved history that underlies every movement and decision. This essay will therefore take the recent 'Troubles' as its main focus; that is, the causes and effects of the collapse of the Stormont assembly on 24th March 1972 and the imposition of Direct Rule by Westminster, ending in 1998 with the Good Friday Agreement. Whilst this tentative agreement has by no means brought a complete halt to the violence and divisions in Northern Ireland, there was considerable hope, that has not yet proved to have been completely unfounded, that it would signify the beginning of the end. ...read more.

There are a number of other, more fundamental and realistic issues that explain the divisions within the province. There were clear class divisions within Northern Irish society throughout the twentieth century that could be said to have had an effect on the development of the Troubles. Stated crudely, there a disproportionate of the middle classes were Protestant, whilst Catholics were much more likely to make up the working classes. In 1971, 69% of Catholics were manual workers, in comparison to 59% of Protestant, and throughout the period the number of unskilled Catholic workers rose, whilst Protestant figures fell. Thus the Northern Irish conflict could be seen in terms of a Marxist struggle - one where the mainly Protestant elites were attempting to maintain the status quo against the demands of the Catholic working class. However, this would be to oversimplify the problem, and overlooks the not insubstantial Catholic middle class and ignores the significant influence the Protestant working class were able to exert on the Unionist leadership. If it had been an issue of class, then it would not be unreasonable to expect that political parties would have organised along class lines, but this was not necessarily the case. Whilst the UUP was heavily dependent on the support of the Protestant working class, this was not at the expense of middle class votes. The differences between the DUP and the UUP were not class-based, but simply political, although it could be said the SDLP attracted more middle-class nationalist support than Sinn F�in before 1998. It might also have been expected that the small Catholic middle class would have been more unionist in character, if it had merely been a class struggle. Therefore to perceive the divisions in society as being along class lines is misleading, but there is a case for looking at the economic inequalities between the two communities, and the effect that they had on the formation and character of the conflict. ...read more.

Their determination to remain a part of the United Kingdom, and their extreme reluctance to grant significant civil rights to the Catholic minority was as a result of their fear of losing their way of life, as well as just an unwillingness to relinquish their privileged status. As McGarry and O'Leary succinctly put it: "National and ethnic attachments tend to be much more binding and explosive in historically established and stable communities than alternative solidarities, like gender or class" and this is especially true of Northern Ireland. There are many aspects of the divisions in Northern Ireland society that this essay has not addressed. More could be said about cultural differences, and the long-term political discrimination, such as gerry-mandering, faced by Catholics that led to the Troubles between 1972 and 1998. External factors, such as British and Irish policy, and other long-term historical factors, such as the nature of British colonialism of the seventeenth and eighteenth centuries, such as the impact of plantation on the political dynamic of the province. It is impossible to blame the Troubles on class conflicts, for Protestants and Catholics simply do not divide neatly into a unionist middle class and nationalist working class. Economic factors did have a significant impact on the development of grievances and intransigence, but also only provide an incomplete picture. Superficially, the conflict can be seen in religious terms - after all it is often described as Catholics against Protestant, as well as nationalist versus unionist. However, in recent decades, as Northern Ireland follows the general European trend for secularisation, and church attendance figures continue to fall, the religious labels are a sign of ethnicity, rather than belief. The entrenched nature of the divisions between the two communities, in the face of improving economic and political conditions and increasing secularisation during the period 1972 and 1998 means that there must have been a further, deeper cause for the conflict, and the question of nationality - British or Irish - is more convincing than the other, admittedly important, possibilities. ~2~ Isobel Bradshaw ~1~ ...read more.