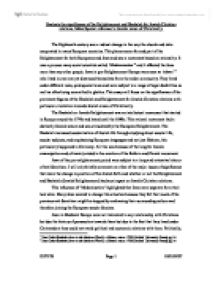 The Eighteenth century saw a radical change in the way the church and state cooperated in many European countries.

The Eighteenth century saw a radical change in the way the church and state cooperated in many European countries. This phenomenon formed part of the Enlightenment for both Europeans and Jews and was a movement based on rationality. It was a process many social scientists called 'Modernisation'1 and it affected the Jews more than any other people. Jews in pre-Enlightenment Europe were seen as 'aliens' 2 who lived in one area yet distanced themselves from the wider community. They lived under different rules, paid special taxes and were subject to a range of legal disabilities as well as often being committed to ghettos. This essay will focus on the significance of the prominent figures of the Haskalah and Enlightenment for Jewish-Christian relations with particular orientation towards Jewish views of Christianity. The Haskalah or Jewish Enlightenment was an intellectual movement that started in Europe around the 1770s and lasted until the 1880s. This rational movement had a distinctly Jewish nature and was stimulated by the European Enlightenment. The Haskalah increased secularization of Jewish life through studying about secular life, secular subjects, and emphasising European languages and not just Hebrew, this particularly happened in Germany. All this was because of the long for Jewish emancipation and ultimately aided in the creation of the Reform and Zionist movement. Jews of the pre-enlightenment period were subject to a long and extensive history of anti-Semitism. I will only briefly comment on a few of the major issues of significance that show the change in position of the Jewish faith and whether or not the Enlightenment and Haskalah (Jewish Enlightenment) had any impact on Jewish Christian relations. This influence of 'Modernisation' highlighted that Jews were separate from their host state. Many Jews wanted to change this situation because they felt that much of the previous anti-Semitism might be stopped by embracing their surrounding culture and therefore joining the European secular Society. ...read more.

Satanow's view on Christianity during the Enlightenment was a rather alarming one. Satanow points out that any unenlightened thoughts references from Jews and from Judaism in general to their supposed Christian origins of exile, which brought about his negative view of what Christianity was imposing upon Judaism. His attitude of aggression towards Christianity and shielding of Judaism was due to his knowledge of Mendelssohn's works and views. The same points that came through from the European Enlightenment which motivated Mendelssohn in part also governed Satanow's accounts. Satanow's way of promoting the adoption of western civilisation as presented by the Enlightenment by the Jews was very similar to that of Mendelssohn. At the same time, he insists on rejecting Christianity which is a central part of the Western Civilisation, in doing so encouraging the Jews to adhere to Judaism. As was typical of Jewish Enlightenment thinkers, Satanow embraced the deistic rejection of Christian and pagan miracles as false, but approved the miracles that are related to the Bible and the Talmud. A similar view is found in the literature of Mendelssohn. Mendelssohn was critical of Christianity while being committed to it. He unmistakably demonstrated that his belief in Christianity was at odds with it. Moreover he illustrated his view with quotations from two psalms which he used to demonstrate a point where Judaism and natural religion converged. In many ways, Mendelssohn's main threat was that (which he voiced in part 1 of Jerusalem) he hoped that European Enlighteners would try to Unify and reunite the Churches. Many different Churches met to try and introduce reforms to try and remove injustices that had led to schism and many of them succeeded. This was Mendelssohn's idea of a nightmare and he wrote: In order to be under the care of this omnipresent shepherd the entire flock need neither graze in one pasture nor enter and leave the master's house the a single door. ...read more.

Jewish life changed dramatically all over Europe by the end of the nineteenth century. The main change was that of the civil status of Jews changing from 'strangers to citizens'21, but this change was not due to natural change. All aspects of the Jewish predicament were taken into consideration by all of the host nations in both the legal side and the public domain. In most of Western Europe, The Haskalah finished with a large number of Jews integrating into their surrounding society. Althought a lot of Jews stopped staying true to the Halakah many did by staying true to the Orthodox traditional view .The great effort in gaining emancipation in German caused a lot of self doubt in whether this was the right direction that Judaism should b heading in and caused a lot of Jews to immigrate to America and was the beginning to Zionism. Unfortunately in Russia a hugge ammout of Anti-Semitism quickly ended the Haskalah and any attempt for emancipation (Emancipation only granted 1917!). Many Jews in Russia replied to this wave of anti-Semitism by campaigning for emancipation, other joined different revolutionary movements and assimilated and others turned to Jewish nationalism in the form of the Zionist Hibbat Zion movement. In conclusion the price paid for the Liberation of the Jewish people in Europe weakened the Jewish Identity radically. Mendelssohn and others work changed the day to day lives of European Jews tremendously. Yet this seemed to go against what Jewish history had been all about. For many traditional Jews, this was seen that their own followers had turned their back on Judaism to embrace a non religious secular society. Had the Holocaust not happened, Jews would be living in a very secular orientated society. The Enlightenment seemed to promise an immediate stoppage to suffering which it did for a short period of time, yet the Judaism that entered into dialogue with Christianity Post World War II was a significantly more diluted of the version that of the Pre-Enlightenment age. ...read more.