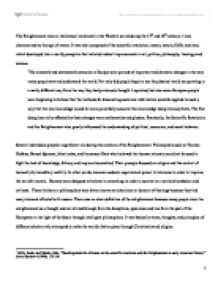 The Enlightenment was an intellectual movement in the Western world

The Enlightenment was an intellectual movement in the Western world during the 17th and 18th century; it was characterized as the age of reason. It was also composed of the scientific revolution, reason, nature, GOD, and man, which developed into a world perception that initiated radical improvements in art, politics, philosophy, theology and science. 1The sixteenth and seventeenth centuries in Europe were periods of important and dramatic changes in the way many people saw and understood the world. Not only did people begin to see the physical world as operating in a vastly different way from the way they had previously thought it operated, but also some European people were beginning to believe that the methods for discovering such new information could be applied in such a way that the new knowledge would be more powerfully accurate than knowledge had previously been. The first disciplines to be affected by these changes were mathematics and physics. Eventually, the Scientific Revolution and the Enlightenment also greatly influenced the understanding of political, economic, and social behavior. Several individuals played a significant role during the creation of the Enlightenment. Philosophers such as Thomas Hobbes, Baruch Spinoza, John Locke, and Immanuel Kant who believed that human rationale could not be used to fight the lack of knowledge, fallacy, and improve humankind. Their precepts focused on religion and the control of humanity by hereditary nobility. In other words, humans needed a supernatural power to intervene in order to improve the world's morale. Humans were designed to believe in something in order to survive in a world of confusion and evilness. These thinkers or philosophers were better known as schoolmen or doctors of theology because they tied every element of belief with reason. There was no clear definition of the enlightenment because many people view the enlightenment as a thought and not a breakthrough from the deceptions, ignorance and lies from the past of the Europeans to the light of the future through intelligent philosophers. ...read more.

Absolute power, then, is an unnatural development in human history (Hooker, 1996). Locke believed that social contracts were developed to protect equal opportunity and sovereignty of humans. Imamnuel Kant was another influential and powerful philosopher who educated individuals on how to bring enlightenment to the general community. Kant explains that, "enlightenment is man's release from his self-incurred tutelage" (Kant 85). In other words, fortification is an individual's lack of ability to have direction for one's self. Kant believed that if humans released themselves from safety or shelter, they should have the liberty to utilize freedom any way they desired. Kant argued that an individual could attempt to rebel, but will only fail and result in a continual cycle of tutelage. One prince said that the coming about of enlightenment will only arrive if you, "Argue as much as you will, and about what you will, but obey!" (Kant 87). Individuals can argue and debate; but they are not allowed to rebel. Kant states, "the public use of one's reason must always be free, and it alone can bring about enlightenment among men, but the private use of reason may often be very narrowly restricted without particularly hindering the progress of enlightenment. For example, Kant explains that people are obligated to pay taxes as his or her private use of reckoning; but an individual can complain about overpaying taxes as a public use of reasoning. Kant explains that if an issue is contradictory to an individual, then it is impossible to fulfill the private and public use of reasoning. 6Kant says, "As things now stand, much is lacking which prevents men form being, or easily becoming, capable of correctly using their own reason in religious matters with assurance and free from outside direction. But, on the other hand, we have clear indications that the field has now been opened wherein men may freely deal with these things and that the obstacles to general enlightenment or the release from self-imposed tutelage are gradually being reduced" (Kant 90). ...read more.