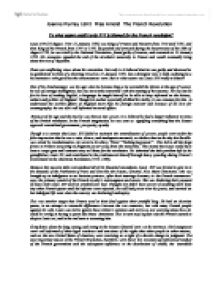 To what extent could Louis XVI is blamed for the French revolution? Louis XVI (23 August 1754-21 January 1793) was King of France and Navarre from 1774 until 1791, and then King of the French from 1791 to 1792. Suspended and arrested during the Insurrection of the 10th of August 1792, he was tried by the National Convention, found guilty of treason, and executed on 21 January 1793. His execution signaled the end of the absolutist monarchy in France and would eventually bring about the rise of Napoleon. There are conflicting views about his conviction. Not only is it believed that he was guilty and deserved to be guillotined in front of a cheering crowd on 21 January 1793, but a divergent view is held, outlining how his intentions were good but the circumstances were. But to what extent was Louis XVI really to blame? One of his disadvantages was his age when he became king as he ascended the throne at the age of twenty; he was of average intelligence, but was not overly concerned with the running of the country. He was known for his love of reading English, a language he taught himself to be able to keep informed on the history, culture and politics of England. Though his mother especially disliked his hobby, it was common for him to understand the current affairs of England more than his foreign minister and because of his love for oceanography; he was also well informed on naval affairs. ...read more.

They were liberated to hold back as much as they wanted, so the Third Estate was paying far more in taxes than truly went to the government. What's worse is that the assets of the country were not centralized; there were hundreds of offices paying out money. By the 1780's, no one had any idea as to what the total asset and liability profile of the nation looked like. The financial crisis precipitated a steep inflationary rise in prices. This inflation was good news for French manufacturing and mercantilism because it resulted in a significant shot of capital into emerging industrial and mercantile businesses. It played hell, however, with the peasantry. Not only did the peasants have to pay higher prices for the basics of life, but landlords began raising fees on the peasantry when they saw their purchasing power decrease. By 1789, over 80 percent of an average peasant's household income went to purchasing bread alone, just bread. In that same year, unemployment in many parts of France was over 50%.This, of course, meant practically bleeding the poorest, most disadvantaged people in the country dry of what little capital they had. As time went on, the Churches and the nobles, making up only three percent of the territory, gathered to them upwards of half of the land in the country; they then turned their sights on the largest portion of the French people, and began to take whatever they could from them. Louis was blamed for this as he was that kept the taxes and even added some on to pay off his debts. ...read more.

On the other hand the revolt of the 3rd estate would affect him. He was stuck in the middle with no was of compromise. Things got worse when the third estate segregated. The Third Estate itself varied greatly in socioeconomic status: some members were peasants and labourers, whereas others had the occupations, wealth, and lifestyles of nobility. These disparities between members of the Third Estate made it difficult for the wealthy members to relate to the peasants with whom they were grouped. Because of these rifts, the Estates, General, though organized to reach a peaceful solution, remained in a long-lasting inside feud. It was only through the efforts of men such as Siey�s that the members of the Third Estate finally realized that fighting among them was fruitless and that if they took advantage of the estate's massive size, they would be a force that could not be ignored. In conclusion, I believe the French Revolution was an astonishingly convoluted affair; it was principally lit by the antagonisms between the first two and the Third Estate, antagonisms rooted in decades of abuse and frustration and not a "despot" who was trying to fix his families mistakes along with his own. Louis xvi may have made some decisions that would make any other monarch twitch with distaste but his intentions were good , and considering his age and his power , he was an adequate king for a place that certainly had a revolution in its midst. Total : 1980 words ?? ?? ?? ?? Joanne Murray L6H2 Miss Arnold The French Revolution ...read more.