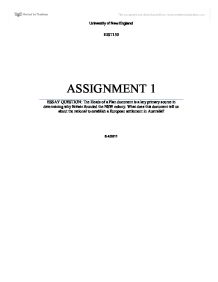 The Heads of a Plan document is a key primary source in determining why Britain founded the NSW colony. What does this document tell us about the rationale to establish a European settlement in Australia?

Asiatic productions). Critique on Blainey's theory. Stress out the importance of focusing on the 'Heads of a Plan' document in its entirety. Argue that there certainly were potential added benefits, but based on the documents, Botany Bay was established as a penal colony to send convicts to. 4. ANNOTATED SOURCES 4.1 Primary sources * Lord Sydney, 'Governor Phillip's Instructions' in Historical Records of Australia, Series I, Vol. 1, Sydney, 1914 in National Archives of Australia, http://www.foundingdocs.gov.au/resources/transcripts/nsw2_doc_1787.pdf, accessed 07 April 2011. The Governor Phillip's Instructions are a primary source from the year 1787. It lists instructions which should be followed by Governor Phillip when travelling to Australia and establishing a colony there. Remarkably, among other instructions, Governor Phillip was told to send home samples of the flax plant for further evaluation as it 'ultimately may become an article of export'.1 Moreover, the securing of Norfolk Island in order to prevent it from being occupied by any other European power is mentioned, what raises the question of the real purpose of the colony and demands investigation.2 * Matra, James Maria, 'Proposal for establishing a Settlement in New South Wales', in Historical Records of New Zealand, ed. Robert McNab, Wellington, 1908, pp. 36-45 in New Zealand Electronic Text Centre http://www.nzetc.org/tm/scholarly/tei-McN01Hist-t1-b2-d1.html, accessed 07 April 2011. ...read more.

but also he offers a direct analysis of a number of articles written by scholars as Blainey, Martin or Frost, who all supported the theory of additional reasons for the establishment. Especially of my interest are his arguments against Blainey's thesis and his conviction that 'The documents on which the traditional explanation is based do not support the explanation of the Botany Bay decision that Blainey proffered in the Tyranny of Distance.'8, as well as his claims of Blainey's theory being 'imaginative'.9 * Gillen, Mollie, 'The Botany Bay Decision 1786: Convicts not Empire' in English Historical Review, Vol. 97, 1982, pp. 740-766. This secondary source gives a detailed overview over the historical events and locations concerning the establishment of the convict colony as well as the different so called flax theories10 connected to it. Mollie Gillen notes that there were numerous rejections of the Botany Bay proposal11, but on the other hand people involved were likewise aware of some of the benefits of the location.12 Interestingly, she summarizes that in the end there was no other option to deal with Britain's convict crisis remained13 and she concludes that the mentioning of flax and timber supplies in the 'Heads of a Plan' rationalised the plan to colonize Botany Bay, as the promise of gold did for Das Voltas Bay14, making the article of high interest for my purposes. 5. ...read more.