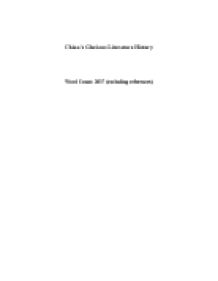 The History and Importance of Chinese Literature.

﻿China?s Glorious Literature History Word Count: 2037 (excluding references) ________________ China?s Glorious Literature History When talking about Literature in the world, China has a unique distinction of being the only country that has had literature written consecutively for three thousand years in just one language. The Chinese language is said to be one of the most meaningful of languages, and the fact that its history in literature is so intriguing, comes to no surprise. Every letter in the Chinese alphabets stands for an idea or a symbol that has been engrossed in the wonderful literature of the infamous Chinese writers, artists and philosophers who graced the great land over the years (Larson, 1998). This paper will talk about the beauty of Chinese literature and the people who made it beautiful. Chinese lay a lot of importance on their literature. Literatures from countries around the world are fast being forgotten with time but Chinese literature is a different story altogether (de Bary, Theodore et al., 1999). Their literature has only one language that has not evolved in all these years. Every letter of the language symbolizes a piece of their illustrious history and tradition. ...read more.

With the theme and main idea of the novel being ?never giving up even at time of adversities?, it became a model of inspiration for several Chinese generations to follow (Owen, 1996). To understand the literature of China, it is essential to understand the dynasties the country saw over these thousands of years. Every dynasty saw writers establish themselves and their works were then celebrated by the following dynasties. Each dynasty represented a different theme to the literature and those themes will be further discussed in this paper. The Han Dynasty (206 BC to AD 220) This was the period when China was going through a never-seen-before political reformation. The idea of politics was being instilled and people were only learning new ways of administration. This was evident in the literature that was produced during this era. Literature from the Han Dynasty talks about the changing ways of life and how people coped with it. It was also during this era that poetry was introduced as part of literature in China. The most popular poets of that time were Liu An, Ssu-ma Ch'ien, and Pan Ku (Woesler, 2008). ...read more.

Leaders of the following dynasties used to read his work in order to get inspired and to get answers to their queries about life and leadership. Lu Xun had the best interpretation of the Chinese history. Culture and the tradition of China have been best encapsulated in his work. The other writer who deserves a worthy mention here is, Li Yu-tang. His most famous works include ?My Country and My People', `The Importance of Living', `On the Wisdom of America' and `The Importance of Understanding?. Just by reading the titles of these pieces of literature, one can guess the content and how it could have helped the people back then who read it (Owen, 1996). China?s literature continues to shine even to date. Most of the writings post the 20th century has aimed to bring reforms to the traditional China. It has aimed to modernize the country. Even Lu Xun?s literature eventually focused on changing the mind-sets of people (Link, 1983). He wanted people to look forward to the modern China and take China to new and greater heights. Such was the beauty of Chinese literature that it not just guided people with the help of Chinese tradition and culture; it still is the major source of inspiration for people of the great country. ...read more.