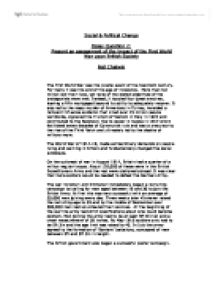 The impact of WWI on British Society

Social & Political Change Essay Question 2: Present an assessment of the impact of the First World War upon British Society Neil Chatwin The First World War was the pivotal event of the twentieth century. For many it was the end of the age of innocence. More than ten million lost their lives, yet none of the stated objectives of the protagonists were met. Instead, it toppled four great empires, leaving a fifth mortgaged beyond its ability to adequately recover. It also led to the mass murder of Armenians in Turkey, heralded a rampant influenza epidemic that killed over 25 million people worldwide, signalled the triumph of fascism in Italy in 1922 and contributed to the Bolshevik rise to power in Russia in 1917 which facilitated seven decades of Communist rule and was a precursor to the rise of the Third Reich and ultimately led to the deaths of millions more. The World War of 1914-18, made extraordinary demands on people living and working in Britain and fundamentally changed the social landscape. On the outbreak of war in August 1914, Britain had a quarter of a million regular troops. About 120,000 of these were in the British Expeditionary Army and the rest were stationed abroad. ...read more.

Women aged 30 or over and men aged 21 or over were given the vote. A new legislation allowing women to stand as MPs was also introduced. Women were not granted the same voting rights as men for two main reasons. Firstly, if women had the vote at 21, in 1918 they would have outnumbered men. Secondly, women under 30 were felt to be too silly and irresponsible to be trusted to vote correctly. While this aspect of British society was changing for the better throughout the war, the scarcity of food became a real problem. Concern over food supplies was increased in early 1917 with the report of the Commission of Enquiry into Industrial Unrest, which found that rising prices were a major cause of strikes. Government plans such as 'Dig for Victory' helped but were not enough. The relentless German U-Boat bombing of food imports resulted in rationing being introduced nationwide at the end of 1917. State control was put into place on such essentials as meat, butter and margarine. This ensured an equal distribution of food throughout the population, although it was possible to purchase items for extortionate prices on the black market. Rationing continued into the immediate post-war years as a means of dealing with the continuing shortages of essential items and the threat of labour unrest. ...read more.

Every community in Britain was brutally and tragically hit. The potential of all these men was lost to the world. Some felt that the 'lost generation' was mostly made up of the educated young officers who might have one day led the country. For example, one in five students from Oxbridge, largely serving as junior officers, were killed. Young artists and poets like Isaac Rosenberg, Rupert Brooke and Wilfred Owen were killed, causing people to reflect on the waste of their talent. Many felt at the time that the 'flower of youth' and the best of the nation had been destroyed. This loss was devastating to the people of Britain but perhaps the real lasting impact was left on those who survived to live through future decades. World War One did not completely end with the signing of the Treaty of Versailles, for its political, economic and psychological effects influenced the lives of people long after the last shot was fired. Despite the advantages brought forth by developing technologies, the war mainly had a damaging effect on the economy in Britain. People's hopes and spirits also floundered, as they grew distrustful of the government and tried to cope with the enormous death toll of the war. The turbulent period after World War One called for a major readjustment of politics, economic policies, and views on the world. ...read more.

This essay includes a number of relevant ideas but does not present them in the best way. It would be improved by restructuring the content to address the question more clearly and to make an argument. The student also needs to include the historiography.