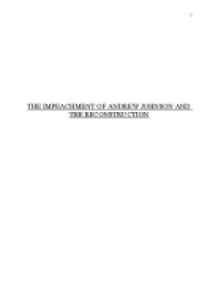 The Impeachment of Andrew Johnson and the Reconstruction

It proposed to let the armies disperse with all of their equipment. It also guaranteed a general amnesty such as the state governments would be recognized by the President, the people would get there political and property rights back, except for slaves, and no citizen ?would be molested by reason of the late war, so long as they lived in peace and obeyed the laws.?[10] The most famous person associated with this theory was General Sherman, but both Sherman and Johnson both agreed that Reconstruction using this theory was not possible. Another theory that was proposed by Thaddeus Stevens is known as the ?conquered provinces? theory. This theory stemmed from the idea that the Constitution had no application to the events of 1861-65 and ?the acts of the Southern states had so shattered the Constitution that they could no longer claim any rights under it.?[11] Stevens argued that the war was not a rebellion, but that the war was a direct attacked on the North and thus the states should be treated as conquered provinces. He argued that the lives and property of the people of the South were at the mercy of the North who could do whatever they wanted to do.[12] Through this theory the Southern social system would be remodeled and as territories the government of the states would be supervised by Congress and would have to apply for readmission to the Union as news states. ...read more.

of the Senate, and having the evil effect of placing in the hands of the President unlimited power over all the officers of the Government. This I understand to be the substance of the eleventh article. It contains many allegations which I regard in the nature of the inducement, but it includes within it the charge of the willful violation of law more specifically set out in the second, third, seventh, and eighth articles, and I shall therefore vote for it.[18] From these words we can understand that the impeachment of Andrew Johnson was not only a political move but that Congress believed that he had violated the eleventh article of the Constitution. In conclusion impeachment of Andrew Johnson was and political move by congress because Johnson chose to ignore Congress and assumed full responsibility for the reconstruction. There are five main theories of reconstruction that were presented and what resulted for the policy of reconstruction was a combination of them both. There were many problems with Johnson?s policy of reconstruction that caused tension between Congress and the President. This tension grew when Johnson decided to ignore Congress, the Tenor of Office Act, and violate the eleventh article of the Constitution. These tensions eventually led to the impeachment of Andrew Johnson four times with the fourth getting Johnson impeached. ...read more.