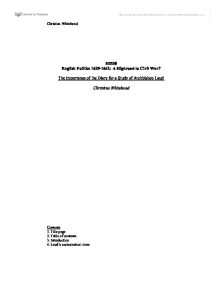 The Importance of the Diary for a Study of Archbishop Laud

HI530 English Politics 1629-1642: A Highroad to Civil War? The Importance of the Diary for a Study of Archbishop Laud Christina Whitehead Contents 1. Title page 2. Table of contents 3. Introduction 4. Laud's ecclesiastical aims 10. Laud's significant relationships 15. Laud's troubles 18. The Diary's fate and Contemporary works 20. Conclusion 21. Bibliography The Importance of the Diary for a Study of Archbishop Laud William Laud, Archbishop of Canterbury from 1633 has traditionally been seen as 'one of the twin pillars of Stuart despotism'1, and the councillor whose influence cost Charles his crown. Though a great deal of contention has surrounded these, and other assumptions about the Archbishop in recent years, the diary, which Laud kept between the years of 1602 and 1643 has not been widely used as a source for his study. It is important to consider Laud not only as primate, but also as an individual in order to obtain the fullest possible understanding of him. As Gaunt has argued that 'Laud is one of those unfortunate historical figures whose biography has been penned largely from the writings of his enemies'2, I feel that an attempt should be made to study Laud solely through his own writings, but in particular his diary, as it was Pynne's falsification of the text after he seized it in 1643 that led to such negative views about the Archbishop, and tainted contemporary and even later historical opinion. Through examination of the diary, I wish to ascertain what can be discovered about Laud's aims and beliefs, his significant relationships, his fears and crucially, his character, and how all of these affected his policies and decisions. The primary source for the dissertation will be Laud's diary, with the composition chiefly focused upon perceptions raised from it, using Laud's other works, letters and charges, as well as Prynne's commentary of the diary and Clarendon's account of Laud to supplement these notions. ...read more.

There I first heard what Sir John Cook, the King's Secretary, had suggested against me to the Lord Treasurer'41. It is therefore evident that Laud had much to thank Buckingham for during the early years of Charles reign, as he was clearly the driving force behind Laud's initial rise to prominence, as well as a solid ally against his enemies. Undoubtedly, a strong bond existed between the two men for Buckingham to go to such lengths to assist Laud. As Laud owed much to Buckingham's influence, it is unsurprising that he refers to him in terms of great affection in the diary, demonstrating his loyalty by describing himself as being truly the Dukes man; 'on all accounts I am bound forever to honour [him]'. However, it has been suggested that there was more to this friendship than meets the eye; Laud, as Buckingham's confessor, could not have been unaware with of the nature of the favourite's relations with James, and it is rather surprising that his homosexuality was not more disturbing to Laud. When Prynne appropriated the diary in 1643, he was quick to seize upon the entry recorded on the 21st August 1625, in which Laud wrote, 'that night in my sleep, it seemed to me that the Duke of Buckingham came into bed to me; where he behaved himself with great kindness towards me'42. When the dream was published in Prynne's 'Breviate of the Life of William Laud' in 1644, Prynne argued that the passage hinted at 'certainly some deep mystery of iniquity fit to be concealed', and suggested that Laud was guilty of 'uncleanness'43, a sentiment which is supported by Carlton, who agues that despite Laud's protestation that 'there was never fasn'd upon me the last suspicion of this sin in all my life', the diary does not wholly support his assertions of innocence.44 Indeed certain entries, such as that of June 1622, in which Laud described the particulars of Buckingham's friendship as being 'not for paper' could be seen an ...read more.

The relationship is unmatched in the diary. The diary is also valuable in illustrating the friendship between Laud and Charles as despite many historians assertions that the two were not close, certain entries, show that this was not the case, the prime example being Laud's record of his honour at being permitted to see the newborn Charles II less than an hour after his birth; one could not find such strong evidence from another source. Arguably the diary's greatest use is in giving the reader a unique insight into Laud's mind, as although he does not often write in great detail, the numerous dreams that he records are highly symbolic, and clearly show the worries which Laud was most concerned with, including his severity of his ill health, his belief that Williams and his other political enemies were out to destroy him and his fate if Charles were to cast him aside. Though Trevor-Roper has suggested that Laud was 'one of those public figures without private lives'81, the diary does much to explain his failure as a public figure; clearly Laud was highly insecure, and though it can be assumed that his fears were most strongly expressed at night, the characteristics which are depicted in his dreams merely underscore his waking thoughts, which goes a long way in explaining why many found Laud so difficult to get along with. In light of these fears, it is noteworthy that he never turned away from his religious aims, especially as their negative public consequences caused him such grief, which shows true fervency in his beliefs, and even a certain arrogance in that he was clearly so convinced that he was in the right. Overall the diary is a difficult text to decipher as Laud varies in the detail with which he writes each entry. Conclusions based on the text are often tentative as it is evident that Laud intended the diary for personal use, and guarded it against ill use by others through minimal description and expression of opinion. ...read more.