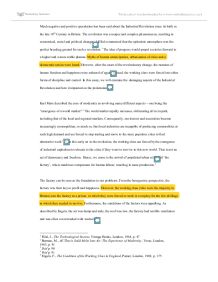 Much negative and positive speculation has been said about the Industrial Revolution since its birth in the late 18th Century in Britain. The revolution was a unique and complex phenomenon, resulting in economical, social and political changes. J. Ellul commented that the optimistic atmosphere was the perfect breeding ground for such a revolution.1 The idea of progress would propel societies forward to a higher and a more stable plateau. Myths of human emancipation, urbanisation of cities and a democratic nation were heard. However, after the onset of the revolutionary change, the rumours of human freedom and happiness were unheard of again. Instead, the working class were forced into other forms of discipline and control. In this essay, we will examine the damaging aspects of the Industrial Revolution and how it impacted on the proletarians. Karl Marx described the core of modernity as involving many different aspects - one being the "emergence of a world market".2 The world market rapidly increases, obliterating all in its path, including that of the local and regional markets. ...read more.

If such time rhythms were not strictly followed, penalties such as fines or physical punishment for children were carried out.7 Such authoritarian enforcement of rules cannot be classified as "human emancipation". In fact, it is the complete polar opposite to what the working class experienced during the revolution. The bourgeoisie not only had absolute control of the factories but also had control over the matter of wages. Despite the bourgeoisie having "created more massive and more colossal productive powers than have all preceding generations together"8, they did not choose to reflect that profit in the workers wages. In contrast, they selfishly chose to cut the already minimal wages to further enhance their own profits.9 It was also said that the manufacturers chose to reduce wages as an incentive for the labourers to work harder and longer to earn their weekly living expenses.10 The wages in which the workers received were at such a minimal level that approximately 500,000 workers starved to their demise. ...read more.

and mental powers to become atrophied".17 This is yet another demonstration of control which the bourgeoisie had over the proletarians - that of their mind and personal development. In conclusion, the Industrial Revolution of the late 18th Century only benefited one group of people - the bourgeoisie. The propaganda sold to the proletarians of human emancipation and freedom from constraints could not be further away from what they experienced during the revolution. What the bourgeoisie failed to tell the proletarians was that "the more capitalism advances the more impoverished the workers become"18. The irony of this matter is that more than a century later, we are unfortunately still in a society where exploitation occurs. Perhaps not as extreme as that of the revolution, but exploitation all the same. Marx suggests that capitalism is a world in need of a 'false consciousness' to act as a constant reminder that we are free, despite the discipline and control bureaucracies have over us.19 However, he also clarifies that the technique (ie. the machines and factories) was not to blame, but the bourgeoisie themselves. ...read more.

This essay provides a reasonable overview of a Marxist approach to the industrial revolution and has identified the major themes and debates. The argument is, however, too one-sided and fails to engage critically with alternative viewpoints. The essay structure could also be improved by having fewer paragraphs. 3 stars.