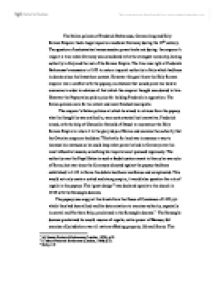 The Italian policies of Frederick Barbarossa

The Italian policies of Frederick Barbarossa, German king and Holy Roman Emperor had a huge impact on medieval Germany during the 12th century. The question of ecclesiastical versus secular power broke out during the emperor's reign at a time when Germany was considered to be the strongest monarchy, having authority in Italy and the rest of the Roman Empire. The time was right at Frederick Barbarossa's accession in 1152 to restore imperial authority in Italy which had been in demise since the Investiture contest. However this goal threw the Holy Roman emperor into a conflict with the papacy, an obstacle that would prove too hard to overcome in order to achieve all that which the emperor thought was denied to him. However the Papacy also paid a price for holding Frederick in opposition. The Italian policies were far too extent and were finished incomplete. The emperor's Italian policies at which he aimed to retrieve from the papacy what he thought he was entitled to, were controversial but innovative. Frederick aimed, with the help of Chancellor Rainald of Dassel to reconstruct the Holy Roman Empire to return it to the glory days of Rome and exercise the authority that the Ottonian emperors had done.1This battle for land was in essence a ...read more.

This proved to wreck many of Frederick's ambitions and gain support for the papacy.9 Alexander III gained the support of France and the Anglo-Norman Kingdom, while in Denmark and Poland the remaining allies of the imperial pope were exiled.10 A year later Alexander was able to establish the city of Alessandria with the help of the League. The city of Alessandria was to the emperor a symbol of papal achievement, and although efforts for settlement with the pope continued, the presence of the Lombard League was something the emperor could not allow during peace. The Italian policy again prevailed with the fifth campaign in 1174 against Alessandria. The emperor again faced defeat and was able to make peace in Montebello with the League, but the Italian policy once again got in the way when Frederick could not accept the inclusion of Alexander III in the peace. Frederick's stubbornness in following his Italian policies (even in opposition to the papacy) however was weakened and a small success was granted to Alexander. The battle of Legnano in 1176 resulted in a near complete destruction of the imperial supremacy in Italy and convinced the emperor to reconcile with the pope.11 Negotiations at Anagni achieved a "far reaching settlement" 12 between emperor and pope. ...read more.

**** A well written piece that discusses the benefits and drawbacks of the free market over the centrally planned economy. Many main points are touched on without going into the necessary depth. A more methodical approach to the debate might have been more revealing.