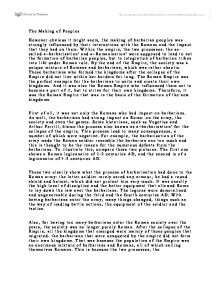 However obvious it might seem, the making of barbarian peoples was strongly influenced by their interactions with the Romans and the impact that they had on them. Within the empire, the two processes: the so-called a~barbarisation' and a~Romanisation' were supposed to lead to not the formation of barbarian peoples, but to integration of barbarian tribes into life under Roman rule. By the end of the Empire, the society was a unique mixture of Romans and barbarians, which was rather chaotic. Those barbarians who formed the kingdoms after the collapse of the Empire did not live within her borders for long. The Roman Empire was the perfect example for the barbarians to unite and create their own kingdoms. And it was also the Roman Empire who influenced them not to become a part of it, but to strive for their own kingdoms. Therefore, it was the Roman Empire that was in the basis of the formation of the new kingdoms.


First of all, it was not only the Romans who had impact on barbarians. As well, the barbarians had strong impact on Rome: on the army, the society and even the games. Some historians, such as Vegetius and Arthur Ferrill, blame the process also known as a~barbarisation' for the collapse of the empire. This process lead to many consequences, a number of which were negative. For example, the barbarisation of the army made the Roman soldier resemble the barbarian one too much and this is thought to be the reason for the numerous defeats from the barbarians. To illustrate this, compare these two pictures. The first one shows a Roman legionnaire of 1-2 centuries AD, and the second is of a legionnaire of 4-5 centuries AD.


These two clearly show what the process of barbarisation had done to the Roman army: the latter soldier rarely cared any armour; he had a round shield and helmet, which did not protect him very much. It was exactly the high level of discipline and the better equipment that allowed Rome to lay down the law over the barbarians. The legions were demoralised and ungovernable during the third and the fourth centuries AD. With having barbarians enter the army, many things changed; things such as the way of leading battle actions, the equipment of the soldier and the tactics.


Also, for having too many barbarians enter the Roman society over the years, the society was no longer purely Roman. After the collapse of the Empire, all the kingdoms that emerged were mainly of those peoples that migrated- the barbarians that were conquered by the empire did not form their own kingdoms. That was because the population of the Empire was an enormous mixture of barbarians and Romans, all of which calling themselves Romans. This is because the two processes, the a~Romanisation' and the a~barbarisation', just like Henri Pirenne, Peter Brown or Lucien Musset would say, transformed the Roman world and the fusion between them resulted first in the Roman society by the end of the Empire and secondly in the world that it left; just the authorities were different.


Ever since the time of Emperor Octavian Augustus, the Empire had a strict policy to impose after conquering a new people. Troops would be positioned in the new territories, new administrators would be sent there. The purpose of this was to gain supreme power and to reduce the risk of rebellions. But, although that hard task was not achieved everywhere, it led to a process of a~Romanisation' of the barbarians. Because the newly arrived Romans had no choice but to live among the barbarians, they mixed with them. For example, the thousands of men there needed women, and therefore some of them married barbarians. Also, the Romans were supplied by the barbarians. The connections that can be found between them in everyday life are numerous. The whole idea of the Roman society was not easily accepted by the barbarians; but by the end of the empire, there are barbarian generals, and even by the time of the Principatus, it was not a strange thing to be a son of a barbarian mother. The Romans adopted parts of the barbarian culture, but the barbarians adopted most of the Roman culture. This is because of the fact that they lived together, but it is up to the ruling nation to define what the outcome of this co-existence would be.


But there is a thesis by William McNeil in his book a~Plagues and Peoples' (1976) that the Antonine Plague in Rome during the end of the second century AD caused the death of many people within the Western part of the Empire. This, as well as the fact that the barbarians from Scandinavia were forced to move south by the Great Cold, might have lead to the end of the Western Empire and given the barbarians the unique chance to destroy antiquity.


In the early ages of the Roman Empire being multinational, the Principatus was able to control barbarian rebellions. But throughout its whole existence, the Empire always had problems with the Germanic tribes, for example, and was never able to defeat the violent tribes in Britannia completely, despite the many victories over them. This might have been some kind of early nationalism, but the frontiers of the Empire served more to divide the allies, rather than the enemies. By the end of the Empire, only the lands were Roman a" the peoples living on them were not. This was only a formality.


The reasons why Rome fell are many and numerous. There are even theses that Rome did not fall, but continue to exist in the version of other countries, such as Byzantium, or even the Franks. If one is interested in the study of the collapse of the Roman civilization, however, there is a book by Alexander Demandt which observes 210 theories on the subject. This is not the point. The point is that we have an empire that collapses and a number of newly (or maybe not?) formed kingdoms on its former territories. The answer to the question why the kingdoms emerged is, however, simple and follows elementary logic.


First of all, these peoples' origins should be traced: Where did they come from? They came from Scandinavia, forced to move south by the Great Cold. But they could not move to the east as well a" the Huns were there. So, they used the opportunity to attack the empire viciously while it was in a period of decline (the tribes in Germania and Britain), or to use it as a shelter from the Huns (the Goths). Why they called themselves Franks, Goths or Vandals is unclear- what is dark about the Dark ages is that we cannot give certain information about everything. The names of the peoples are a subject as unclear as how their culture was formed. Still, back in the woods of Germania, a certain tribe with a certain leader might have invented their name and started forming their habits, thus forming a certain culture. Of course, the Roman influence all over the barbarian world is certain, as the whole process of the forming of barbarian kingdoms is on the basis of interactions with the Romans.


The Great Migrations are a part of a process, which is extremely complex. We cannot define which nations were within the Roman Empire or outside her borders, we can only differ barbarians by if they lived inside the Empire before she collapsed. The situation was pretty much like this:


So, we cannot say that some of the peoples did not migrate. For example, if the Vandals did not migrate, then how can we call this movement that they made, from the very edge of Europe in the North to Carthage in the South and then to Rome, Peloponnese and Sicily? Also, the Goths made a sufficiently great move from Scandinavia to Spain. They did change their identity along the way, it is impossible not to, but in the end they moved all across the continent. On the other hand, the Anglos, Saxons and the Franks moved just a few hundred kilometres, which is definitely not a migration. To come to one and the same conclusion for all the peoples in Europe is an argument made by a simple mind. Each and every people is individual, and if the making of a given people is a result of migration or change in identity is individual as well. In general, all the peoples experienced a change in their identity to some extent, but the process of the formation of nations should be observed on an individual basis.
The first barbarians to enter the Roman Empire were the Goths. They entered Roman lands in search of defence from the Huns and their intentions were not military at all, although some of them bribed the Roman soldiers at the frontier to smuggle their weapons inside the Empire. Due to famine, they began the Gothic wars (376-382), which resulted in the destruction of a Roman Army and the death of Valens, the Eastern Roman Emperor, at the battle of Adrianople (376). The result of that was that the Romans had a problem: the Goths were inside their territories, wandering the Balkans with nearly no opposition and in 410 sacked Rome. Who would suppose that treating a a~minor' barbarian people badly would be the thing to break the camel's back! The Romans most certainly did not. This is the case when the Romans are the cause for an extremely mighty fierce barbarian tribe to form a country. And that was not simply a country, but one of the mightiest successors of Rome, as the Ostrogoths settled in Italy and the Visigoths in Spain.


The making of peoples during the period of Late Antiquity/ early Middle Ages consists not only of the creation of barbarian peoples, but also of the dissolution of the Roman Empire. However, what happened to the Roman nation after the fall of the Empire is unclear. But it is certain that a nation that controlled the whole know world for nearly a millennia could not disappear without a trace. Even though the reasons for the collapse of the Roman Empire are numerous, most of them are related to military weakness, caused by economic decline and a~barbarisation', and barbarian attacks. Again, it was the Romans who helped the peoples form, although the ethnogenesis began way earlier in Scandinavia and Germania, as people started to unite as tribes. Later on, after long relations with the Romans and being influenced by them, the peoples established their own kingdoms. But the main reason for that were the one and only Romans. They destined themselves to death and also it was them who made the peoples. The truth is that we could never be certain about anything that happened in that period, because the sources that we have are unreliable and insufficient.