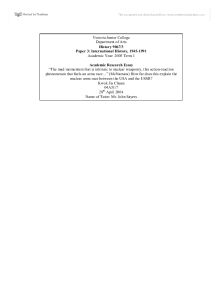 The Nuclear Arms race between the USA and the USSR

The nuclear arms race has, with quite considerable justification, been looked upon as the most dangerous characteristic of the Cold War; certainly, to see it as the defining event of that conflict would not be far removed from the truth. For the first time in history, nuclear weapons threatened the extinction of the entire human race; their sheer magnitude of destruction meant that millions of years of history could be wiped out in the event of a nuclear war. Yet it was precisely because of this magnitude that the nuclear arms race remained an arms race: two nations competing for nuclear supremacy, without trying to hurt the other. They did come close to doing to - the Cuban crisis in 1961 and the Yom Kippur war in 1973 - but in the end the bluster of leaders on both sides about nuclear war remained largely rhetoric. Thus we have to look at how the arms race managed to bring about this potential for destruction and the forces which moved the arms race along. In examining the nuclear arms race and why it precipitated such a "mad momentum", there are four areas of study to be considered: the conception of an arms race, the principle of action-reaction, the strategic and political concerns of the superpowers and the nuclear arms race in the larger context of the Cold War. Once President Truman ordered the atomic bomb to be dropped on Hiroshima, the nuclear arms race started proper. Given the basic ideological conflict between the US and the Soviet Union, the Second World War was but an alliance of necessity to defeat Nazi Germany. ...read more.

Indeed, before the world had a chance to experience the horrors of nuclear war, it was stopped by the horrors of anticipated nuclear war. In short, the nuclear arms race between the US and the Soviet Union served the purposes of ultimate deterrence: by trying to outdo the other, the superpowers maintained the balance of world peace within nuclear weapons. Though this might not have been recognized officially, it was always in the minds of the leadership of the superpowers. Advances which threatened to upset deterrence - MIRVs and ABMs - were quickly limited or banned. It is worth noting that while until the INF Treaty of 1991 the superpowers were unable to agree on nuclear arms reduction, ABMs had already been restricted by SALT 1 twenty years before. Clearly, while the superpowers tried their best to gain an edge over each other, they were conscious of the delicate deterrence that nuclear weapons provided. We now arrive at the strategic and political balance between the superpowers. While nuclear weapons were an important part of the Cold War, they were still only a part, and more often than not the general trends of the arms race were harnessed to the aims of the superpowers. Certainly, the differing strategic attitudes of the superpowers helped to explain the fluctuations of the nuclear arms race. While the US still had a nuclear monopoly; it sought to enhance that monopoly and protect it, resulting in the Baruch Plan of 1946 being proposed to the UN. The Soviets, on the other hand, were trying to break the monopoly, which led to their rejection of the Plan due to the fact that it would only have secured the position of the US as the sole nuclear power. ...read more.

Any advantage constituted an extra point in political negotiations, and nuclear inferiority meant the potential for the other side to survive a first strike and launch a counter-assault. This fear of anticipated nuclear war, as mentioned above, was enough to force strategic and political concessions as seen in the Berlin Blockade and Cuban Crisis. Thus we see how the nuclear arms race came to be subsumed under the Cold War: the momentum for the arms race had to be sustained in order to achieve other objectives which only indirectly required their presence. In conclusion, the nuclear arms race was fuelled by misinformation and suspicion as much as it was fuelled by any desire to gain nuclear superiority. In the atmosphere of the Cold War, national security was uppermost in the mind of the superpowers, and nuclear weapons provided that frame of security. Once the superpowers had built enough weapons to exceed the potential for destruction, the nuclear arms race became a race of who had more in order to force the other into submission. As such, the threat of nuclear war, combined with a misguided perception of the opposing side's actions, fuelled the "mad momentum" that was to characterize the arms race and lead to the ever-spiraling numbers of nuclear weapons available to the superpowers. 1 Lowe Norman, Mastering Twentieth-Century Russian History (New York: Palgrave, 2002) pp.317 2 Holloway, David. Stalin and the Bomb (Yale University Press, 1994) 3 http://www.johnstonsarchive.net/nuclear/wrjp205b.html 4 Ulam, Adam. The Rivals: America and Russia since World War II (London, 1973) pp. 66 5 Mason John, The Cold War 1945-1991 (London: Routledge, Lancaster Pamphlets, 1996) pp.25 6 http://nsarchive.chadwyck.com/nh_ack.htm 7 Ball S.J. The Cold War: An International History 1947-1991 (London: Arnold Publishers, 1998) pp.73 8 Mason John, The Cold War 1945-1991 (London: Routledge, Lancaster Pamphlets, 1996) pp.26 ...read more.