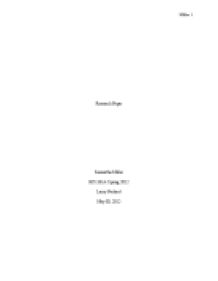 The One Hundred Years War

﻿Miller Research Paper Samantha Miller HIS 331A-Spring 2012 Larry Neitzert May 30, 2012 Hundred Years War The Hundred Years War was an armed and governmental struggle that carried on from 1337 to 1453. The main contributing nations in the fighting were England and France. A majority of the conflict was battled on French territory. There are several fundamental motives for the war, but the direct reason of the war started when the King of France seized English land in France, mainly the territory of Aquitaine. Philip IV was the king of France at the time the war started and Edward III was the king of England. The combat, however, was not constant. Instead it was a series of fights, ceasefire agreements, and breaches of these ceasefire agreements. With more than a hundred years of battles amongst the two nations, there were numerous significant battles and aspects of combat that changed these nations forever. The war lead to immense changes in both nations, leading to major modifications of their governments. The background to the war can be originated 400 years prior, in 911, at what time Carolingian Charles the Simple permitted the Viking Rollo to settle down in a portion of his territory (an area identified later as "Normandy"). In 1066 the "Normans" were commanded by William the Conqueror (the Duke of Normandy) and captured England, conquering the Anglo-Saxon headship at the Battle of Hastings, setting up a different Anglo-Norman power organization. It is essential to note for upcoming occasions that beginning with Rollo, Norman influential leaders were vassals to the King of France, even once they as well come to be kings in England. ...read more.

The first part of the Hundred Years War was as disastrous for England as well as for France. Vicious fighting disturbed the economy, there were horrendous plagues such as the Black Death in 1348 which killed at least a third of the population in both England and France, and also the bloody and vicious peasant revolts which pillaged the nobles? houses and castles. A ceasefire was declared in 1360. The English had earned a huge win at Poitiers when they apprehended the French King Jean le Bon. He was held for length of time but was soon ransomed for gold coins which were called francs or free gold. This was the beginning of the Franc in France. Upon his release he agreed to leave large portions of land in western France to the control of the English. This ceasefire allowed the French King to gain more control. ?In 1369 the Count of Flanders died, and the French king, Charles V, had - for the time being - driven the English from their early conquests in the north of France. He broke the Anglo-Flemish alliance, by forcing the Count's only child, Marguerite of Flanders, to marry his brother Philippe, Duke of Burgundy. The marriage joined the Low Countries in the north with Burgundy in the east. After a few skirmishes, Flanders acquiesced? (Invicta Media, 2003). By 1382, Richard II has lost most of the French lands won by his grandfather Edward III During this time the English King fell very ill and was dying. Before he died he had hoped to build a stronger Anglo-Flemish alliance by marrying the heiress to his fifth son. ...read more.

Although the English still had control over most of Normandy, they started to think that they were going to lose the war and they started to question why they were even fighting anymore. Negotiations began in 1435 between France and England. Although they went nowhere for years, finally in 1444 there was a general truce at Tours. Both sides were hoping that the arranged marriage between the French princess Margaret of Anjou and Henry VI of England would be the first step in ending the war. By 1470, the English have lost everything except Calais In 1449 the newfound peace between the two countries was quickly destroyed when an English force sacked and robbed Fougères in Brittany. This gave Charles VII, who during the halt in fighting reorganized his army, the opportunity to back out of the treaty because England had failed to keep their part of the agreement. In 1449 Charles VII quickly dispatched his army to Normandy and overran the English. In 1451, once again the French defeated the English in Gascony. A year later, the English commander, John Talbot arrived in Gascony with some reinforcements and retook Bordeaux. His victory was short lived. On July 17, 1453his army was catastrophically beaten at Castillon and Talbot was killed. http://www.theotherside.co.uk/tm-heritage/background/100yearswar.htm Now that the French had regained Bordeaux, the English had no more territory in France other than Calais. This was ultimately the end of the war as far as England was concerned. A formal treaty between England and France was finally signed in 1475. Particularly, the Hundred Years' War is perceived by several scholars as a period in the apparently continuous struggle amongst the English and French countries, as disagreements and open war were recurrent, which was constant as late as the Napoleonic times, and which stretched well outside Europe as the two countries fought for global territories. ...read more.