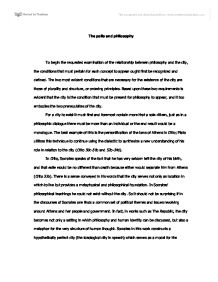 The polis and philosophy.

The polis and philosophy To begin the requested examination of the relationship between philosophy and the city, the conditions that must pertain for each concept to appear ought first be recognized and defined. The two most evident conditions that are necessary for the existence of the city are those of plurality and structure, or ordering principles. Based upon these two requirements is evident that the city is the condition that must be present for philosophy to appear, and it too embodies the two prerequisites of the city. For a city to exist it must first and foremost contain more that a sole citizen, just as in a philosophic dialogue there must be more than an individual or the end result would be a monologue. The best example of this is the personification of the laws of Athens in Crito; Plato utilizes this technique to continue using the dialectic to synthesize a new understanding of his role in relation to the city (Crito 50c-51b and 52b-54d). In Crito, Socrates speaks of the fact that he has very seldom left the city of his birth, and that exile would be no different than death because either would separate him from Athens (Crito 52b). ...read more.

In his myth of the cave, the human "city" composed of prisoners within the cave is represented as being below the sun and in the darkness away from true knowledge of the forms. These prisoners typify the human experience within the city, limited in its comprehension, and guided in its urges only by the shadows it sees. Eventually, however, a "freed" citizen comes to selectively and carefully encourage them into the light. This is the role into which Socrates casts philosophers who try to encourage others to see the essence of philosophy. As Socrates says elsewhere, no one born a philosopher can stand falsehood, and one imagines that at some point this teacher must have found the courage to break free and discover the truth for himself by ascending above, and must now be returning below to lead others to this light. However, the inmates are shown as being less than thrilled at the prospect of having knowledge. Socrates uses this example to show why there may be some instinctive rejection of his philosophies about life. It also serves as a fair counterpoint to the idea that the great city will willingly follow their antiseptic guardians and their sterile philosophy. ...read more.

He suggests that to overthrow his condemnation would not attack the men who condemned him, but would attack the law. The law, in this case, however, was a philosophy wielded by the hand of desire and the city itself. Perhaps this suggests a form of balance between thought and action, in which thought may develop schemes and value systems and guides along which action must always run (the "law" of the city) and yet the desire and needs of the body are free within those systems to do as they will even if the intellect is momentarily opposed to it. In the real world, this would suggest that philosophy must guide the lawmaking process, but that a democratic city would be capable of working within those laws even if it meant the downfall of one or another philosopher or philosophy. Such a balance makes sense in the greater scope of Socrates' life and meaning. Throughout his Apology, he argues that a misguided fool such as himself is necessary to keep the city healthy. Contrariness is part of his nature and his function. So some philosophy may be necessary to guide, and other philosophy necessary because it must be denied. Likewise some actions and urges may be necessarily denied, while others must be necessarily honored. ...read more.