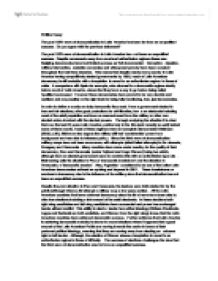 The post 1978 wave of democratization in Latin America has been far from an unqualified success. Do you agree with the previous statement?

Politics Essay The post 1978 wave of democratization in Latin America has been far from an unqualified success. Do you agree with the previous statement? The post 1978 wave of democratization in Latin America has not been an unqualified success. Despite movements away from cruel and authoritarian regimes these new fledgling democracies have had limited success as 'full democracies'. Corruption, injustice, military intervention, unstable economies and widespread poverty have been constant throughout the last three decades. This means that despite nearly every country in Latin America having competitively elected governments by 1990, much of Latin American democracy is still unstable with a temptation to revert to an authoritarian regime in times of crisis. A comparison with Spain for example, who returned to a democratic regime shortly before much of Latin America, shows that they have a way to go before being called 'qualified successes'. However these democracies have proved to be very durable and resilient, and are possibly on the right track to being fully functioning, free, just democracies. In order to define a country as truly democratic they must: Have a government elected in free and fair elections, offer good protections for civil liberties, have an electorate including most of the adult population and have no encroachment from the military or other non-elected actors involved with the elected powers. ...read more.

State sponsored violence in Venezuela is very much a part of the Chavez regime and in countries like Colombia and Mexico peoples liberties are being threatened not by the state, but by vicious drug cartels and gangs with the state doing little or unable to do anything to help. Social justice has not been achieved for a huge number of family members who have had relatives killed or kidnapped in previous regimes or during democratization, human rights has suffered continuing violations according to Skidmore (2005). Even in Chile 'a country considered an example of successful economic restructuring and democratic transition' Zekmi and Leiva (2005, p.88) hasn't been able to bring justice to the people that deserve it. Former dictator Pinochet was granted a life presidency on his return to Chile instead of being tried for crimes against humanity. In Argentina high ranking generals were actually tried in the early-mid 80s and sentenced, however, due to actions by the military a few years later these sentences were repealed. The horrific lack of justice for human rights crimes and violations since much of Latin America became democratic and the probable lack of justice that will continue for a while yet means that the third wave of democratization, in this aspect has failed. ...read more.

less privileged segments of the population' Gwynne (2004, p.166), the success of the third wave of democratization in Latin America will always be limited because of corruption and government failings, as countries are not able to grow economically or make social advancements. However in the case of Mexico and Brazil gradual improvements are being made. Therefore you could say the process of democratization is far from complete Skidmore (2005), and what will follow in the next 10-20 years will give a good indication of the success of the third wave of democratization. In conclusion I believe that the third wave of democratization in Latin America has not been an unqualified success. This is due to economic and government failings, military intervention and a complete lack of any justice for crimes committed during authoritarian rule. However, these democracies have been shown to be resilient and durable and will hopefully grow and mature therefore the democratization is not far away from being successful but there have been problems. Unfortunately it seems that these problems won't go away quickly, but, becoming democratic is a good step along a long road for Latin America, but a lot of the problems that Latin America has faced since become democratic have yet to be resolved. ...read more.