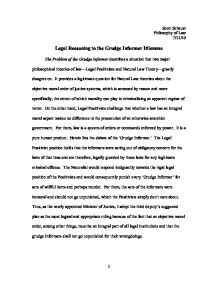 The Problem of the Grudge Informer describes a situation that two major philosophical theories of lawLegal Positivism and Natural Law Theorygreatly disagree on.

Scott Schauer Philosophy of Law 7/21/10 Legal Reasoning to the Grudge Informer Dilemma The Problem of the Grudge Informer describes a situation that two major philosophical theories of law-Legal Positivism and Natural Law Theory-greatly disagree on. It provides a legitimate question for Natural Law theorists about the objective moral order of justice systems, which is accessed by reason and more specifically, the extent of which morality can play in criminalizing an apparent regime of terror. On the other hand, Legal Positivists challenge that whether a law has an integral moral aspect makes no difference to the prosecution of an otherwise anarchist government. For them, law is a system of orders or commands enforced by power. It is a pure human product. Herein lies the debate of the 'Grudge Informer.' The Legal Positivist position holds that the informers were acting out of obligatory concern for the laws of that time and are therefore, legally guarded by those laws for any legitimate criminal offense. The Naturalist would respond indignantly towards the rigid legal position of the Positivists and would consequently punish every 'Grudge Informer' for acts of willful harm and perhaps murder. ...read more.

To accept the first deputy's recommendation would take on a strict positivist role, which is insufficient to the misconduct performed by the informers. In the second deputy's recommendation the same resolution is reached, but by the conclusion that there were no laws at all during that time. He says, "What they did do was neither lawful nor contrary to the law, for they lived, not under a regime of law, but under one of anarchy and terror" (Fuller 161). He admits that it was a "war of all against all" and that the "so-called grudge informers were just one phase of that war" (Fuller 161). Logically, this cannot be a significant reason to overlook the atrocities that the informers intended to commit. The second deputy is essentially sweeping the entire period of the Purple Shirt regime under the rug, including the grudge informers. It occurs to me, as in the first deputy's recommendation, that an apathetic attitude is suggested toward the wrong actions of the grudge informers. Something must be done simply to avoid another reign of terror. To not act would be the most harmful act. ...read more.

Somewhere in between those two extremes lies the problem of the 'Grudge Informer', which is why the third deputy offers punishment on a case-by-case basis. This particular group of people within the Purple Shirt regime knowingly used the legal system to the benefit of themselves and not of the entire society. In this case, the grudge informers were operating under unjust laws even though they were following their laws. Saint Thomas Aquinas would agree with me when he declared, "An unjust law is a human law that is not rooted in eternal and natural law" (MLK 80). This brings us back to the debate between Naturalists and Positivists in which I am inclined, as is the case for Fuller, to believe that there is some internal morality within law; that "Law is not merely order, but good order" (Adams 44). The informers themselves exemplified the positivist tradition in that they didn't hesitate at the possible morality of the situation, but followed the law with tunnel vision and consequently should be punished accordingly. Like Fuller, my perspective of the 'Grudge Informer' is not strictly from the naturalist's but, rather, one that doesn't agree with the positivist's. As a result, neither Fuller nor I would agree with any deputy but the third. ...read more.