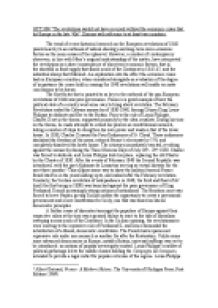 The revolutions would not have occurred without the economic crises that hit Europe in the late 1840s. Discuss

﻿HST5306 ?The revolutions would not have occurred without the economic crises that hit Europe in the late ?40s?. Discuss with reference to at least two countries. The trend of recent historical research on the European revolutions of 1848 points heavily to an outbreak of radical ideology and long-term socio-economic factors as the main causes of the upheaval. However, a number of contemporary observers, in line with Marx?s original understanding of the matter, have interpreted the revolutions as a direct consequence of short-term economic factors; that is, the shortfall in food supply that shook much of the Continent in 1845-47, and the industrial slump that followed. An exploration into the effect the economic crises had on European countries, when considered alongside an evaluation of the degree of importance the crises held in causing the 1848 revolutions will enable accurate conclusions to be drawn. The first factor that is pointed to as key to the outbreak of the pan-European revolutions of 1848 was poor governance. France is a good example of how the political state of a country went some way to bring about revolution. The February Revolution ended the Orleans monarchy of 1830-1848, forcing Citizen King Louis-Philippe to abdicate and flee to the Britain. Prior to the rule of Louis-Philippe, Charles X sat in the throne, supported primarily by the ultra-royalists. During his time on the throne, he made attempts to extend his powers as constitutional monarch, taking a number of steps to strengthen his own power and weaken that of the lower house. ...read more.

regional distribution of the events?.[2] Instead the revolutions are seen as a direct consequence of the serious shortfall in harvests that shook the Continent 1845-47, leading to widespread famine and hunger riots throughout Europe. Nineteenth century statistician, Ernst Engel, goes so far as to propose that the economic crisis ?triggered the bomb?[3] in Europe. Even a cursory examination of the facts revealed in Berger and Spoerer?s study, following the aftermath of poor harvests point to its? significance in the European revolutions. The first factor key to understanding the importance of economic factors in the outbreak of European revolutions in 1848 is the grain-price shock that hit most European countries in the second half of the 1840s, and the reverberations that were felt afterwards. Around 1850, European lower-class households spent between two-thirds and three-quarters of their income on food products.[4] The bulk of this cost was on grain products and potatoes, rendering households budgets sensitive to price changes of either product. The smaller the overall size of the budget, the greater the sensitivity, as low income households tended to allocate a larger proportion of their budget to food. As a trend, most of Europe experienced a dramatic increase in the price of wheat 1845-47, but by 1848 and the outbreak of revolutions, prices had once again stabilised. The time lag between price-shock and revolution is explained simply by the fact that whilst people face starvation and low incomes with poor harvests, they are physically weak and focused on their day-to-day survival. ...read more.

Having suffered a sever socioeconomic shock, the European peasants and artisans of the 1840s wanted a change, some kind of alternative vision - ?realistic or otherwise?[5] ? before they would revolt. An alternative vision they found in the voices of peasant and working class leaders, leaders who appealed to concepts of fairness. Together with townsmen politically discontent with the current system, they called for liberalism and democracy. Unlike the economic crisis of 1816-17, when there was still popular belief that the restoration forces could be beaten, the crisis of 1845-47 happened amid a plethora of political alternative to rule, with a far larger call for immediate action. The likelihood here that revolutionary ideology was a necessary condition for upheaval transcends a narrow economistic approach. Without the critical mass of support, provided as a direct result of the propagation of the price shock of 1845-47, mere revolutionary ideology was of little use. Revolutionaries, attempting to push their newfound ideology in undemocratic, and in some places repressive regimes would not have found a footing without the ?brawn? supplied by the discontent masses; they needed violence, or the real fear thereof, for use as a political tool. To surmise, without the economic crisis of 1845-48, which so obviously endangered the economic welfare of so many people and discredited the ancient regime so thoroughly, there would not have been the critical mass necessary to provide support and longevity to these new ideas. Appendix I Tables, and the data therein, are taken from Berger and Spoerer, Economic Crises and the European Revolutions of 1848, The Journal of Economic History, Vol. 61, No. ...read more.