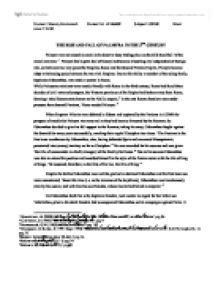 THE RISE AND FALL OF PALMYRA IN THE 3RD CENTURY

THE RISE AND FALL OF PALMYRA IN THE 3RD CENTURY Palmyra was set around an oasis in the desert a busy trading place on the Silk Road full 'of the camel caravans.'1 Palmyra had a great deal of history and became a bustling city independent of foreign rule, set between two very powerful Empires; Rome and the Sasanid Persian Empire, Palmyra became adapt at balancing peace between the two rival Empires. Due to this ability a member of the ruling family, Septimius Odaenathus, was made a senator in Rome. While Palmyrene relations were mostly friendly with Rome in the third century, Rome had faced three decades of civil wars and usurpers, the Western provinces of the Empire had broken away from Rome, forming a rebel Roman state known as the 'Gallic empire,'2 in the east Roman frontiers were under pressure from Sasanid Persians, 'Rome needed Palmyra.'3 When Emperor Valerian was defeated in Edessa and captured by the Persians in AD260 the prospect of trouble for Palmyra was very real as they had been so favoured by the Romans. So Odaenathus decided to give his full support to the Romans, taking his army, Odaenathus fought against the Sasanid for many years successfully, reaching their capital Ctesiphon two times. ...read more.

Zenobia then declared herself Empress or Augusta as well as Queen or Regina 'the most illustrious queen, mother of the king of kings.'18 At the height of Zenobia's and Palmyra's power she held large portions of the eastern territories including the cities of Antioch and Alexandria; these cities were two of the three largest cities in the Roman Empire. Zenobia lived in luxury, 'she lived in regal pomp. It was rather in the manner of the Persians that she received worship and in the manner of the Persian kings that she banqueted; but it was in the manner of a Roman emperor that she came forth to public assemblies, wearing a helmet and girt with a purple fillet, which had gems hanging from the lower edge.'19 However Zenobia's thirst for power bought about the downfall of her, her empire and Palmyra itself. The new Emperor Aurelian had recently taken the thrown paid great attention to all of Zenobia's arrogant declarations. Aurelian was talented and vigorous, unlike previous emperors; he was a skilled commander. It was Aurelian who drove the barbarians back when they threatened Italy; he also slew disloyal senators and rebuilt the walls of Rome. ...read more.

Envoys were sent from all around the world to the celebrations and to see Zenobia paraded down the streets 'she could not endure the load of her gems. Furthermore, her feet were bound with shackles of gold and her hands with gold fetters, and even on her neck she wore a chain of gold.'36 What happened to Zenobia is still unclear, some sources have Aurelian beheading her 'he had paraded her in Rome in triumph in the accustomed fashion, he beheaded her.'37 Others state Aurelian gave her an estate on the Tiber, 'Zenobia spent the rest of her days in the city (of Rome) and was accorded the highest respect.'38 Whatever her ending, Zenobia's achievements have assured her place in history with Cleopatra and Boudicca. The rise and fall of Palmyra fits in with the crisis of the third century which Rome faced. Palmyra came into focus as being an important city with no power of its own and yet it rose to threaten the two powerful empires of the day; Rome and Persia. Palmyra never recovered from Zenobia's defeat but the city would never have achieved the fame it did without her. Zenobia is a figure in history which shows what great achievement and splendour women can accomplish with fortitude, intelligence and an army. ...read more.