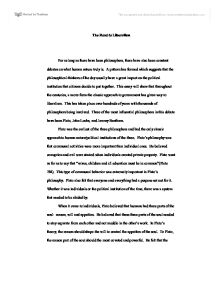 The Road to Liberalism.

The Road to Liberalism For as long as there have been philosophers, there have also been constant debates on what human nature truly is. A pattern has formed which suggests that the philosophical thinkers of the day usually have a great impact on the political institution that citizens decide to put together. This essay will show that throughout the centuries, a move from the classic approach to government has given way to liberalism. This has taken place over hundreds of years with thousands of philosophers being involved. Three of the most influential philosophers in this debate have been Plato, John Locke, and Jeremy Bentham. Plato was the earliest of the three philosophers and had the only classic approach to human nature/political institutions of the three. Plato's philosophy was that communal activities were more important than individual ones. He believed corruption and evil were started when individuals created private property. Plato went as far as to say that "wives, children and all education must be in common"(Plato 194). This type of communal behavior was extremely important in Plato's philosophy. Plato also felt that everyone and everything had a purpose set out for it. Whether it was individuals or the political institution of the time, there was a system that needed to be abided by. When it came to individuals, Plato believed that humans had three parts of the soul: reason, will and appetites. ...read more.

This was the beginning of liberalism: the point of view that the liberty of the individual comes before anything else. Another major area that Locke disagreed with Plato in was that of property. Private property was so important to Locke that he made it one of the three cornerstones of an individual's rights. Labor was the reason behind people's right to have private property and according to Locke, "every man has a property in his own person...the labor of his body and the work of his back"(Locke 19). Private property made through labor, according to Locke, was the responsibility of the political institution to protect from others who did not have a valid claim of ownership. This was the reason that he believed humans consent to a government in the first place. Locke and the liberal viewpoint disagree in three major areas with Plato's classical model: property, equality and liberty. In all three areas, Locke took the individual's side and gave the power to the individual. Plato and the classical view did the opposite and gave the power to the community. Therefore, because Locke disagreed with Plato and believed the individual has certain unalienable rights, said the government should protect its citizens' private property and liberty over everything else while abiding by a social contract, and believed that individuals should look at their own needs before that of the community, democracy would be the political institution of choice for Locke. ...read more.

Both of these problems have direct correlations to both Plato and Locke's ideas. Yes, it is true that the United States has prospered in dealing with mostly Locke's principles, but when one looks more closely into the situation, there are people struggling to make it through every day without food or money. And although Plato's ideas sound good on paper, history shows that power cannot be left to a select few. The only surviving model of the three, therefore, is Bentham's. The only places that currently employ a political institution similar to that of Bentham's are the Scandinavian countries of Sweden and Norway. When looking at the standard of living and the foreign relations of both countries, the good results speak for themselves. Although we may never know the true nature of the human race and clearly understand what political institution should be set into place, philosophers will continue to experiment with ideas that move us into the 21st century and beyond. Plato, John Locke, and Jeremy Bentham all had very different ideas about what political institution would best cater to the needs of the individual. In the end, though, if philosophers of the new age want to truly understand human nature and learn from these earlier philosophers, they must first concede, as Lord David Cecil puts it, "The first step to knowledge is to know that we are ignorant. ...read more.