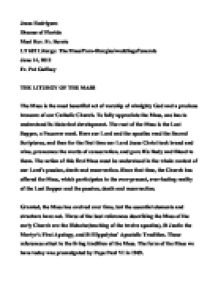 The root of the Mass is the Last Supper, a Passover meal.

Jesus Rodriguez Diocese of Florida Most Rev. Fr. Bernie LT 602 Liturgy: The Mass/Para-liturgies/weddings/funerals June 14, 2012 Fr. Pat Gaffney THE LITURGY OF THE MASS The Mass is the most beautiful act of worship of Almighty God and a precious treasure of our Catholic Church. To fully appreciate the Mass, one has to understand its historical development. The root of the Mass is the Last Supper, a Passover meal. Here our Lord and the apostles read the Sacred Scriptures, and then for the first time our Lord Jesus Christ took bread and wine, pronounce the words of consecration, and gave His Body and Blood to them. The action of this first Mass must be understood in the whole context of our Lord's passion, death and resurrection. Since that time, the Church has offered the Mass, which participates in the ever-present, ever-lasting reality of the Last Supper and the passion, death and resurrection. Granted, the Mass has evolved over time, but the essential elements and structure have not. Three of the best references describing the Mass of the early Church are the Didache(teaching of the twelve apostles), St Justin the Martyr's First Apology, and St Hippolytus' Apostolic Tradition. These references attest to the living tradition of the Mass. The form of the Mass we have today was promulgated by Pope Paul VI in 1969. The Order of the Mass comprises four major parts: The Introductory Rites, the liturgy of the Word, the Liturgy of the Eucharist, and the Concluding Rite. The Liturgy of the Word and the Liturgy of the Eucharist "are so closely connected with each other that they form one single act of worship". Moreover, "the church has always venerated the divine Scriptures as she venerated the Body of the Lord, in so far as she never ceases, particularly in the Sacred Liturgy, to partake of the Bread of Life and to offer it to the faithful from the one table of the Word of God and the Body of Christ". ...read more.

Moreover, the earlier version of the Creed which is know as the Apostles Creed was also used in the Mass. The Petitions, General Intercessions, or Prayer of the Faithful have also been used since the early days of the Church. St. Paul in his First Letter to St. Timothy said, "I urge that supplications prayers, intercessions and thanksgivings be made for all men, for kings and all who are in higfh positions"(Timothy 2:1-2). The offering of petitions followed a three part structure: a call to prayer, the petitions and the priest concluding prayer. St. Justin said that the petitions should remember the needs of the Church: the intentions of the Bishop and clergy; peace in the world; a good harvest; the country and city; the sick; poor and needy; the dead; the forgiveness of sins; and a holy death. Later, the petitions were dropped from the Order of the Mass; however, the Vatican Council II directed that the Prayer of the Faithful be restored to the Mass. Resources: ---The Mass Explained, Thomas A McHanon, 1978 ---Second Vatican Council: Constitution on Sacred Liturgy, 1963 ---The Didache.com ---The Didache in Modern Research: An Overview; Draper, Jonathan A. 1996 ---Stt. Justin, Martyr(100-165), rosarychurch.net ---St Hippolytus Apostolic Tradition: The Apostolic Tradition of Hippolytus of Rome; Translation by Bernard Botte, 1984 ---The Dogmatic Constitution on Divine Revelation, Promulgatede by Pope Paul VI, Nov. 18, 1965 ---General Instruction of the Roman Missal, Mar. 17, 2003 ---Catechism of the Catholic Church, promulgated by Pope John Paul II, 1997 ---The Mass of Paul VI, Pope Paul VI, 1969 ---Catholic Encyclopedia, 1910 ---Liturgical Catachism, Fr. DJ Wollaston, 2009 ---www.catholicliturgy.com Jesus Rodriguez Part 2 Diocese of Florida Most Reverent Fr. Bernie LT 602 Liturgy: The Mass/para-liturgies/Weddings/Funerals June 14, 2012 Fr. Pat Gaffney THE LITURGY OF THE MASS After the Liturgy of the Word, the Mass proceeds with the Liturgy of the Eucharist. Here the focus of action is on the altar, as the Liturgy of the Word was on the ambo. ...read more.

After the distribution of Holy Communion and the purification of the vessels, the priest offers the Closing Prayer. The Mass concludes with The Concluding Rite--the concluding prayer, the blessing, and the dismissal. In all, our Catholic Church has a beautiful and precious treasure in The Mass. None of us must ever take the Mass for granted or become lukewarm towards it. Moreover, priest should offer the Mass reverently and joyfull. The second Vatican Council reminded the laity in particular of their role: "The Church, therefore, earnestly desires that Christ's faithfull, when present at this mytery of faith, should not be there as strangers or silent spectators. On the contrary, through a good understanding of the rites and prayers, they should take part in the sacred action, concious of what they are doing, with devotion and full collaboration. They should be instructed by God's Word, and be nourished at the table of the Lord's Body. They should give thanks to God. Offering the Immaculate Victim, not only through the hands of the priest but also together with him, they should learn to offer themselves. Through Christ, the Mediator, they should be drawn day by day into ever more perfect union with God and each other, so that finally God may be all in all". Resourses: ---The Mass Explained, Thomas A. McHanon; 1978 ---Second Vatican Council: Constitution on Sacred Liturgy; 1963 ---The Didache.com ---The Didache in Modern Research: An Overview; Draper, Jonathan A. 1996 ---St. Justin, Martyr(100-165), rosarychurch.net ---St. Hippolytus Apostolic Tradition: The Apostolic Tradition of Hippolytus of Rome; Translation by Bernard Botte, 1984 ---The Dogmatic Constitution on Divine Revelation, promulgated by Pope Paul VI, Nov. 18, 1965. ---General Instruction of the Roman Missal, March 17, 2003 ---Catachism of the Catholic Church, promulgated by Pope John Paul II, Sept. 1997. ---The Mass of Pope Paul VI, 1969. ---Catholic Encyclopedia, 1910 ---Liturgical Catechism, Fr. DJ Wollaston, 2009 ---www.Catholicliturgy.com ...read more.