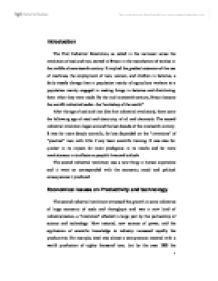 Introduction The First Industrial Revolution, as called in the narrower sense the revolution of coal and iron, started in Britain in the manufacture of textiles in the middle of seventeenth century. It implied the gradual extension of the use of machines, the employment of men, women, and children in factories, a fairly steady change from a population mainly of agriculture workers to a population mainly engaged in making things in factories and distributing them when they were made. By the mid nineteenth-century, Britain became the world's industrial leader--the "workshop of the world." After the age of coal and iron (the first industrial revolution), there came the following age of steel and electricity, of oil and chemicals. The second industrial revolution began around the last decade of the nineteenth century. It was far more deeply scientific, far less depended on the "inventions" of "practical" men with little if any basic scientific training. It was also far quicker in its impact, far more prodigious in its results and far more revolutionary in its effects on people's lives and outlook. The second industrial revolution was a new thing in human experience and it went on corresponded with the economic, social and political consequences it produced. ...read more.

This means, the large scale import of cheap foodstuffs and living materials from overseas accelerated the improvement in the development of transportation and refrigerator. The legal limitation of the hours of labor became one of the most important demands in man movement for the betterment of the conditions of the working class: it had been a major item, for instance, in the revolution of the French workers in 1848 and in the growing international working-class movement and strikes of the 1880s. Furthermore, the definition of Communism was introduced by Marx and Engels, which gave the idea of the welfare of the working class first in France in 1871. And it didn't take so long time for people to witness the birth of a communist country. Urbanization as another important consequences of the second industrial revolution The scientific, technological and industrial changes not only made the world come closer, but also turned the towns and cities bigger and urbanized. With the big amount of workers coming to cities and more emigrations, the population of Europe rose by no less than one hundred million between 1870 and 1900. ...read more.

" In short, the economic motive of the Imperialism was the need of raw materials, secure markets, or investment opportunities, which means industry was confronted with compelling reasons for seeking new markets, finance for securing safer and more profitable outlets for capital abroad and so on. At the same time, new Imperialism had become a world-wild movement, in which all the industrialized nations were involved. Germany and the new power balance However, Germany, with her "World Policy" ensured it a leading place in the global constellation which now appeared to be taking the place of the old European balance of power. The rise of Germany as an industrial giant is a distinguishing feature of the "second" Industrial Revolution. Profiting from British experience, Germany rose to the challenge in the later nineteenth century and set her own distinctive marks on industrial leadership. Conclusion The second industrial revolution that had started in Europe was a world revolution, and it couldn't be checked or restrained in no sphere, technological, social, or political. The consequences of the second industrial revolution are as well focused on these issues or even more on the contemporary arts, literature, human activities and cultures. However, except the effect of European Civilization, all the results are connected and could influence each other as a whole. ...read more.

This essay is basic and lacks structure and argument. It contains some useful content but it is not ordered well enough to make a persuasive argument, and would need rewriting. The basic content is sound and shows the student has made an effort to understand the topic.