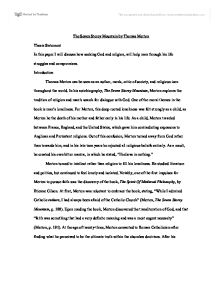 The Seven Storey Mountain by Thomas Merton Thesis Statement In this paper I will discuss how seeking God and religion, will help man through his life struggles and compromises. Introduction Thomas Merton can be seen as an author, monk, critic of society, and religious icon throughout the world. In his autobiography, The Seven Storey Mountain, Merton explores the tradition of religion and man's search for dialogue with God. One of the moral themes in the book is man's loneliness. For Merton, this deep-rooted loneliness was felt strongly as a child, as Merton he the death of his mother and father early in his life. As a child, Merton traveled between France, England, and the United States, which gave him contradicting exposures to Anglican and Protestant religions. Out of this confusion, Merton turned away from God rather than towards him, and in his late teen years he rejected all religious beliefs entirely. As a result, he created his own bitter mantra, in which he stated, "I believe in nothing." Merton turned to intellect rather than religion to fill his loneliness. He studied literature and politics, but continued to feel lonely and isolated. ...read more.

Reflection The moral autonomy argument, which is what Merton was struggling with in his loneliness with self, is a question of what is worthy to worship. In moral autonomy, the idea that any being is worthy of worship is difficult to comprehend. The act of worshipping is also an act of obedience, and in religion, man gives freely his obedience to an all-knowing and all-powerful being. The problem as it arose with Merton, and why so many identified with his struggle, is that although man admits that such a being exists, he questions whether the being should be recognized as having "unlimited claims" on his total obedience. From Plato to Kant, the issue of moral authority is a never-ending struggle in which man places moral precepts on himself to behave in certain ways. When man fails in his attempt, he becomes filled with "self-contempt and inner abhorrence." As these feelings isolate him and loneliness sets in to fill the space of isolation, he becomes a moral agent of God. In this light, a person with virtue is a person of integrity who acts in accordance with the precepts that allow for imperfection, because in a man's heart there is a conscientious desire to improve. ...read more.

Merton notes that when man is apart from God, he experiences alienation as well as desolation, and that he must discover God as the center of his being to which all things tend and to whom all of our activity must be directed. Thomas Merton was attractive to so many after World War II because he provided a simple answer to loneliness-it was obedience to something greater than man himself. In order to end the feeling of isolation and loneliness, man needed to simply change his behavior and submit his will to God. In doing so, as Thomas Merton described in The Seven Storey Mountain, man would be achieving his divine purpose, in which he would be rewarded with true peace and fulfillment. There is in the world today a thirst for God. People are seeking a reversal of the trends toward consumerism and materialism, as well as prejudice and violence. People are discovering that what one does must be a means of both self-fulfillment as well as a service to others. Thomas Merton's The Seven Storey Mountain offers advice on how society today can be conscious and attentive to God, in order to hear the answers to the difficult questions in their lives. ...read more.