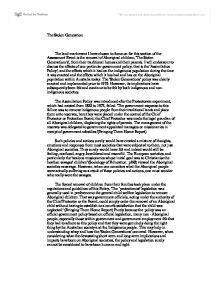 The land mark event I have chosen to focus on for this section of the Assessment Event is the removal of Aboriginal children, 'The Stolen Generation/s', from their traditional homes and their parents. I will endeavour to discuss the effects of one particular government policy, that is the 'Assimilation Policy', and the effects which it had on the indigenous population during the time it was enacted and the effects which it has had and has on the Aboriginal population within Australia today. The 'Stolen Generations' policy was clearly enacted and implemented prior to 1975. However, its implications have subsequently been felt and continue to be felt by both indigenous and non-indigenous societies.

The Assimilation Policy was introduced after the Protectorate experiment, which had existed from 1833 to 1972, failed. 'The government response to this failure was to remove indigenous people from their traditional lands and place them onto reserves, here they were placed under the control of the Chief Protector or Protection Board, the Chief Protector was made the legal guardian of all Aboriginal children, displacing the rights of parents. The management of the reserves was delegated to government appointed managers or missionaries in receipt of government subsidies.'(Bringing Them Home Report)

Such policies and actions surely would have created a mixture of thoughts, emotions and responses from most societies that were subjected to them, not just Aboriginal societies. They surely would have felt and indeed would still be feeling, confused, angry, bewildered and resentful. The European societies, and particularly the 'zealous missionaries whose initial goal was to Christianise the heathen savages' children' (Sociology of Education: p198) viewed the Aboriginal societies as savage. However, when one considers what the Aboriginal people were actually suffering as a result of these policies and actions, one must wonder who really were the savages.

The forced removal of children from their families took place under the regulations and guidelines of this Policy, 'The `protectionist' legislation was generally used in preference to the general child welfare legislation to remove Aboriginal children. That way government officials, acting under the authority of the Chief Protector or the Board, could simply order the removal of an Aboriginal child without having to establish to a court's satisfaction that the child was neglected.' (Bringing Them Home Report) Purely because the policy was an official government policy based on official legislation, many non- Aboriginal people, especially those within government and government employment felt that they had to adhere to this policy and that they were genuinely doing the right thing by the Australian society and the Indigenous people. This may help in understanding whay and how the 'Stolen Generations' occurred. However, when considering what the devastating short-term and long-term implications and impacts have been on Aboriginal societies, the policy and legislation surely cannot be considered to have been humane and right.

In 1937 the first Commonwealth-State Native Welfare Conference was held, where the Chief Protector of Aborigines in Western Australia, Mr. A.O. Neville was recorded as saying; "We have power under the act to take any child from its mother at any stage of its life... Are we going to have a population of one million blacks in the Commonwealth or are we going to merge them into our white community and eventually forget that there were ever any Aborigines in Australia?' (NSW HSC On-line) At this conference it was apparently resolved that the protectionist legislation was not working and that a new policy must be implemented, thus the Assimilation Policy was born.

The policy of assimilation was officially adopted in 1937; its essence was the concept of 'one Australian society'. The ideal of the government policy was to encourage the 'absorption of Aboriginals both racially and culturally, into mainstream white society'. The aim of the assimilation policy was to 'remove 'half-caste' children from their families so that they could be taught the ways of white Australia. The ultimate goal was to absorb the 'half-castes' into the white community with the hope that 'full-blooded' Aboriginal people would 'die out as quickly as possible''. 'It was thought that the earlier a child was removed from Aboriginal society, and the more completely the child was isolated from it, the more likely successful assimilation became'. (Antonio Buti, 2000)

Certainly in hindsight at least, it is extremely disturbing when one actually thinks that this was done and consider appropriate. It's distressing to think that Aboriginal people were 'deprived of their children, many of whom were removed and placed in institutions or fostered or adopted into non-Aboriginal families'. (Contemporary Issues B, p 39)

The implications and impacts of the legislation and policies were and still are almost immeasurable. An effect of the forcible removal policies was the destruction of cultural links. Children were forbidden to associate with their culture, they were discouraged from using their language/s, they were taken from their communities/family and land, their identities were purposely lost in the hope that the traditional law and culture would die out because the children would loose their birthright to them. This loss and refusal to allow these children their birthright was encouraged by the environments that the children now found themselves in. While living in non-indigenous homes the children were discouraged or prevented from seeing their Aboriginal families and in turn this denied the child any involvement in his/her traditional origins, thus due to not being able to communicate with elders they in turn did not learn about their spiritual beliefs, ceremonies or traditional song or dance. 'These children were deprived of their right to the songs, and the spiritual and cultural heritage that was theirs'. (Bringing Them Home Report)

The effects of the cultural isolation and loss caused by the governments 'Assimilation Policy', led to many children becoming 'Lost', not knowing exactly where they belonged within the boundaries of society. Many were not 'white' by skin colouration; many were not 'black' by skin colourations, this led to many becoming despondent and rebellious towards both communities Aboriginal and non- Aboriginal. As these children grew into adults, so did their problems grow, many began relationships and started families of their own, some then began to question their heritage, always wondering where in the scheme of things they belonged, always having a feeling of longing to belong ' the fact that many children from the 'stolen generation' missed the experience of being properly parented has widely impacted on Aboriginal family life, for the denial of this experience has resulted in individuals whose ability to parent his or her own children is severely compromised', .( Bringing Them Home Report) Many knew that their cultural heritage was Aboriginal, but they did not know how to connect with this, many turned their frustrations onto their families, some turned to alcohol, some were abusive towards all races, some abused their families or themselves.

In conclusion I would say that the effects and implications of the 'assimilation policy' on the Aboriginal societies of the past and those of the present and future have been horrific. This policy has had and will have an impact on Aboriginal and non-Aboriginal communities for many years to come for it not only separated families and communities, but denied the parenting and nurturing of a generation of Aboriginal peoples and has also significantly contributed to breakdowns in relationships between the non-Aboriginal and Aboriginal parent. The policy's background and implications as presented in this essay surely suggest the policy was flawed and misguided to say the least. As a final comment it could be said that in many ways the full list and extent of the policy's implications may and probably will never really be known. The physical and mental scars may never truly be healed and I feel that there will always be the niggling feeling of loss amongst the Aboriginal society within Australia.