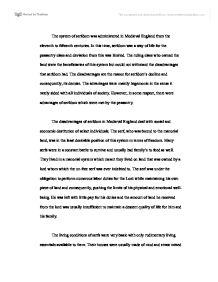 The system of serfdom in Medieval England.

The system of serfdom was administered in Medieval England from the eleventh to fifteenth centuries. In this time, serfdom was a way of life for the peasantry class and deviation from this was limited. The ruling class who owned the land were the beneficiaries of this system but could not withstand the disadvantages that serfdom had. The disadvantages are the reason for serfdom's decline and consequently, its demise. The advantages were mainly hegemonic in the sense it rarely sided with all individuals of society. However, in some respect, there were advantages of serfdom which were met by the peasantry. The disadvantages of serfdom in Medieval England deal with social and economic destitution of select individuals. The serf, who was bound to the manorial land, was in the least desirable position of this system in terms of freedom. Many serfs were in a constant battle to survive and usually had family's to feed as well. They lived in a manorial system which meant they lived on land that was owned by a lord whom which the un-free serf was ever indebted to. The serf was under the obligation to perform numerous labor duties for the Lord while maintaining his own piece of land and consequently, pushing the limits of his physical and emotional well-being. ...read more.

all of which had to be given the lord's permission in order to proceed.8 The nature of the lord's control over the serf persisted in a succession of money payments. Rent for his stretch of land was mandatory but so was additional payments known as "Tallage at will". This payment was decided by the lord and could be required of the serf on more than one occasion throughout the year. 9 Further oppression upon the serf was administered by claiming his property after his death, known as a heriot. This action given by "the power of the lord" directly effected the family of the serf who were clearly disadvantaged to begin with yet, now had to deal with the loss of their provider.10 These oppressive demands of the lord caused the serf much hardship and severely deprived him in relation to the other social classes in Medieval England. The economic disadvantages of serfdom as a system in medieval England usually depended on the available resources of the manor. The lord had his demesne land and the peasants, who were either free or bound to the land (serf), shared the rest of the land between them. The serf was usually left with less than five acres and many times it was insufficient to feed him and his family. ...read more.