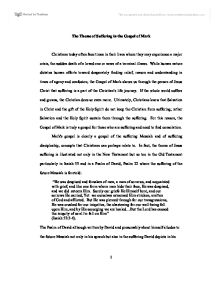 The Theme of Suffering in the Gospel of Mark.

The Theme of Suffering in the Gospel of Mark Christians today often face times in their lives where they may experience a major crisis, the sudden death of a loved one or news of a terminal illness. While human nature dictates human efforts toward desperately finding relief, reason and understanding in times of agony and confusion, the Gospel of Mark shows us through the person of Jesus Christ that suffering is a part of the Christian's life journey. If the whole world suffers and groans, the Christian does so even more. Ultimately, Christians know that Salvation in Christ and the gift of the Holy Spirit do not keep the Christian from suffering; rather Salvation and the Holy Spirit sustain them through the suffering. For this reason, the Gospel of Mark is truly a gospel for those who are suffering and need to find consolation. Mark's gospel is clearly a gospel of the suffering Messiah and of suffering discipleship, concepts that Christians can perhaps relate to. In fact, the theme of Jesus suffering is illustrated not only in the New Testament but so too in the Old Testament particularly in Isaiah 53 and in a Psalm of David, Psalm 22 where the suffering of the future Messiah is foretold: "He was despised and forsaken of men, a man of sorrows, and acquainted with grief; and like one form whom men hide their face, He was despised, and we did esteem Him. ...read more.

After Peter's confession that Jesus is the Messiah, Jesus changes his preaching. A new urgency comes into his style and he starts to talk about his coming death. Peter tried to rebuke him, but Jesus said "away from me Satan" (8:33). He saw death coming and did not want to have to go through it. From then on Jesus had this anticipation until the night that he was betrayed. Jesus went to the garden of Gethsemane to pray. He was in agony as he prayed and asked his father that if there was any other way to take away his imminent death may it be so but in the end it would be the Lord's will that it would be done (14:35-36). His own disciple then betrayed him. The remaining apostles abandoned him, and he was left alone. Jesus was then blindfolded and struck by the people in the court and beaten by soldiers (14:53-65). The next day he appeared before Pilate, after his hearing he was again taken to be beaten, mocked, and ridiculed by the soldiers. They hit his head with a staff and put a crown of thorns on his head. He was put on the cross and died in agony (15:1-37). This is the end of Jesus' suffering on earth. ...read more.

These conflict stories show the mounting hostility towards Jesus on the part of the scribes and the Pharisees. In Mark 1:23-26, 3:7-12, 5:1-20 and 9:14-19, Jesus is in conflict with the demons. They recognize that their hour of destruction has arrived. Most of the conflicts, but not all, are resolved but each is resolved in a different manner. Jesus resolves the conflict with the demons through his healing power; the conflict with the authorities comes to an end when Jesus is put to death, which moreover fulfills God's redemptive plan. The problem with the disciples continues to the end of the gospel; whether or not it is ever resolved remains an open question, since the gospel concludes without explaining the effects of the Resurrection on the disciples. However, Chapter 16:9-20, with its post-resurrection appearances and Jesus' ascension seems to change in Mark's style as those verses depict the disciples in a much better light for they are more optimistic in their attitude towards Jesus. Conflict is often a significant factor in suffering: conflict with family, conflict with society, conflict with emotions and feelings. It is safe to say there is hardly a form of suffering that does not involve conflict. Although, just as in Mark's gospel, some of these conflicts may be resolved, many conflicts Christians go through can and will remain unresolved as well. As stated earlier, the disloyalty of the disciples contributed to the suffering that Jesus had to endure. ...read more.