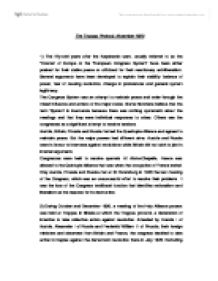 The Troppau Protocol, November 1820 1) The fifty-odd years after the Napoleonic wars, usually referred to as the "Concert of Europe or the "European Congress System" have been either praised for their stable peace or criticised for their reactionary anti-liberalism. Several arguments have been developed to explain their stability: balance of power, fear of causing revolution, change in preferences and general system legitimacy. The Congress System was an attempt to maintain peace and order through the mixed influence and actions of the major states. Some historians believe that the term 'System' is inaccurate because there was nothing systematic about the meetings and that they were individual responses to crises. Others see the congresses as a significant attempt to resolve tensions. Austria, Britain, Prussia and Russia formed the Quadruple Alliance and agreed to maintain peace. But the major powers had different aims. Austria and Russia were in favour to intervene against revolutions while Britain did not wish to join in internal arguments. ...read more.

3) Britain and France were the only Great Powers which did not participate in the agreement. Britain objected on principle to the suggested intensive action against the Neapolitan Liberals. Therefore she was represented by Stewart an ambassador in Vienna and the half-brother of the Foreign Secretary at the time known as Viscount Castlereagh. France also had given no plenary powers to her representatives, though her policy was less clearly described. So, from the very beginning of the congress, it was clear that a division between the eastern and western powers was growing. Metternich's failure to convert Castlereagh to his views was now of secondary importance; the "free" powers being in agreement, it was safe to ignore the opinions of Britain and France, whose governments, whatever their opinion is, were restricted by constitutional forms. In a series of conferences, in which the representatives of Britain and France were not permitted was on the excuse that they were only authorised to "report," not to "decide". ...read more.

Without such an agreement time would run out on the lifeline of the system. 5) Only Austria, Russia and Prussia signed the Troppau Protocol while Britain and France refused to do so as both were in favour of the forces of change which were liberalism and nationalism. This was one of their major fears of the three countries who signed the protocol as they supported conservatism; the force of continuity and were against the ideologies of liberalism and nationalism. They didn't want any change in their governmental system even less a revolution. Their aim behind the Troppau Protocol was to keep away from the forces of change so that their citizens won't get influenced with new political ideas. Even the fact of certain revolutions against the Bourbons which occurred in Spain and its colonies in South America seemed to be a threat to conservatism. While all this was happening secret societies were forming the mostly known was the Carbonari. All in all one can conclude that no form of agreement could be reached as long as both forces accept each others opinions. ...read more.