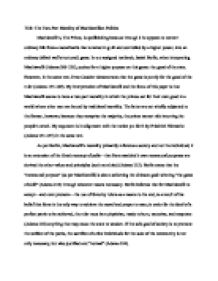 The Two-Part Morality of Machiavellian Politics

Title: The Two-Part Morality of Machiavellian Politics Machiavelli's, The Prince, is spellbinding because through it he appears to convert ordinary life from a moral battle that is mired in guilt and controlled by a higher power, into an ordinary (albeit well structured) game. In our assigned textbook, Isaiah Berlin, when interpreting Machiavelli (Adams 206-235), pushes for a higher purpose on this game: the good of the state. However, in the same text, Ernst Cassirer demonstrates that the game is purely for the good of the ruler (Adams 155-169). My interpretation of Machiavelli and the focus of this paper is that Machiavelli seems to have a two-part morality in which the princes act for their own good in a world where other men are bound by traditional morality. The latter are not wholly subjected to the former, however; because they comprise the majority, the prince cannot risk incurring the people's wrath. My argument is in alignment with the notion put forth by Friedrich Nietzsche (Adams 251-255) in the same text. As per Berlin, Machiavelli's morality primarily references society and not the individual; it is an extension of the Greek concept of polis--that from mankind's own communal purposes are derived the other values and principles (such as ethics) (Adams 213). Berlin states that the "communal purpose" (as per Machiavelli) is about achieving the ultimate goal: winning "the game of skill" (Adams 214) ...read more.

This is not because Machiavelli does not believe in the existence of morality, but because he could find no use for it when analyzing his own experience with the problems of politics (Adams 158). Throughout his essay, Cassirer constantly criticizes Machiavelli for his advocacy for the inhumane treatment of the citizens, claiming that life is not a chess game, but then hypocritically condones the use of force based on the unreliability of human nature. Cassirer's analogy of Machiavellian politics to a game of chess is astutely accurate. In chess, the object of the game is to win-and the only way to win is to check mate; the number of pieces remaining is of no importance in determining the victor. Sacrifices can and should be made if the loss of those pieces eventually helps win the game. Machiavelli's advice to a prince is comparable to this, Cassirer posits, because the dishonesty, perfidy, and callousness is a means to an end...winning the game (Adams 157). Cassirer's argument that The Prince is not based on morality stems from the parallel of ruler and chess player. One of his first contentions states that although the state and the sovereign may be legibus solutus (released from the laws), "this only meant that they were free from legal coercion; it did not mean that they were exempt from moral obligation" (Adams 156). ...read more.

Were these business leaders not making these decisions, modern corporations would not move beyond their first challenging moment. Because princes are free from the boundaries of morals, their energies can be devoted to their own self-preservation. Although this sounds as if society is defenseless, in theory (perhaps not in reality) if the prince follows all Machiavelli's guidelines for ruling, society will benefit as well. This is because a controlled and ordered society is accomplished when the prince has the absolute and unwavering obedience of the people. To attain this status of control, Machiavelli says the prince must have the fear of the people-but cannot be hated by them. The benefit of the people is owing to this last requisite: the people cannot despise the prince. All his actions, therefore, must appear beneficial to society while allowing him to maintain his authority. My reasoning is that although some actions will only be externally beneficial, some must have a positive affect for society. To sum it up, the prince must keep order (through fear), but must also maintain a relatively content and prosperous society (so as not to be despised). The prince is born a prince, a "ripe fruit", with the qualities of both a fox and a lion, and with the knowledge and understanding of how morality applies to the rest of mankind, the "unripe fruit". ...read more.