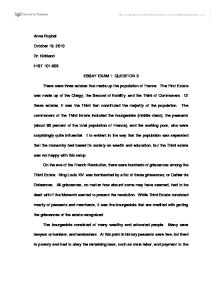 Anna Ruybal October 19, 2010 Dr. Kirkland HIST 101-003 ESSAY EXAM 1: QUESTION 3 There were three estates that made up the population of France. The First Estate was made up of the Clergy, the Second of Nobility, and the Third of Commoners. Of these estates, it was the Third that constituted the majority of the population. The commoners of the Third Estate included the bourgeoisie (middle class), the peasants (about 80 percent of the total population of France), and the working poor, who were surprisingly quite influential. It is evident in the way that the population was separated that the monarchy had based its society on wealth and education, but the Third estate was not happy with this setup. On the eve of the French Revolution, there were hundreds of grievances among the Third Estate. King Louis XVI was bombarded by a list of these grievances, or Cahier de Doleances. ...read more.

Being that the First and Second Estates consisted of the Clergy and the Nobility, having equal votes made it impossible for the Third Estate to make any gain politically or economically. Whenever the Third Estate made an attempt to pass a law that did not directly benefit the upper First or Second Estates, it was voted against. The bourgeoisie wanted to be recognized by King Louis XVI the same way the nobility was. Through this grievance they had gone to Louis XVI to seek justice, and were angered when he made them wait for hours while he was checking the credentials of the other Estates. After their aide in the Seven Year War, France faced an economic downfall. To make up for the money they had lost Louis XVI placed a ridiculous tax on the population of France. Because the Clergy was the Catholic Church, they were exempt from all forms of taxation, and the nobles, being noble, were also exempt from taxation, leaving all of the tax on the back of the Third Estate. ...read more.

Because of the Tennis Court Oath, Louis XVI granted that the Estates General combine as a one body legislature. By doing this, the Third Estate finally had a voice in politics. Under the national Assembly, a new constitution was written which levied equal taxes under Estate and Class, and universal mall suffarage. The Third Estate had attempted to address their grievances to Louis XVI numerous times, when he had paid no attention, and even tried to kick them out of the meetings, they had no choice but to rebel, or they would have lived in a county ruled by the Wealthy and Educated, that were constantly keeping the Third Estate on the lower end of the totem pole. They wanted to be seen as equals to the clergy and the nobility, to be protected from them and the political radicalism of the monarchy. If not for the Tennis Court Oath, they would have never gained results for their grievances. ...read more.