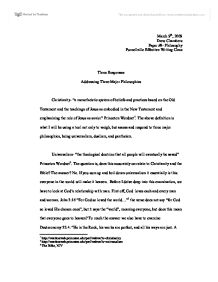 March 9th, 2009 Drew Chambers Paper #8- Philosophy Purcellville Effective Writing Class Three Responses Addressing Three Major Philosophies Christianity- "a monotheistic system of beliefs and practices based on the Old Testament and the teachings of Jesus as embodied in the New Testament and emphasizing the role of Jesus as savior" Princeton Wordnet1. The above definition is what I will be using a tool not only to weigh, but assess and respond to three major philosophies, being universalism, dualism, and pantheism. Universalism- "the theological doctrine that all people will eventually be saved" Princeton Wordnet2. The question is, does this accurately correlate to Christianity and the Bible? The answer? No. If you sum up and boil down universalism it essentially is this: everyone in the world will make it heaven. Before I delve deep into this examination, we have to look at God's relationship with man. First off, God loves each and every man and woman. John 3:16 "For God so loved the world..."3 the verse does not say "for God so loved His chosen ones", but it says the "world", meaning everyone, but does this mean that everyone goes to heaven? To reach the answer we also have to examine Deuteronomy 32:4: "He is the Rock, his works are perfect, and all his ways are just. ...read more.

All in all universalism fails to look at the big picture and instead focuses only on God's unfailing love, but not his resolute justice. Dualism- " the doctrine that reality consists of two basic opposing elements, often taken to be good and evil"7 Princeton Wordnet. When you boil down dualists beliefs, you find this core maxim: good and evil are always at battle in an endless war, neither stronger nor better than the other, and both completely independent, existing from all eternity. Neither of the powers, gods, or spirits has the right to call itself the true God and each one thinks the other is wrong and it is right. The difference is that one supports hatred, thinking it is the completely accurate way to live, and the other love, also thinking this position is right. Now, what exactly do we mean when we label one power "good" and the other "bad" or "evil"? In all actuality, when saying this, we are saying that simply prefer one to the other, or, that no matter what each spirit thinks or what mankind values at the moment, one of them is wrong. If we mean the first reason, then we must simply put "good" and "evil" on the shelf, for if true "good" meant ...read more.

may say "he put a lot of himself into it" meaning his passion and inspiration, or that the beauty came from his head, but you do not mean that he himself is the painting. If the painting burns up or is torn, the painter does not die, this is the Christian view, but from the Pantheist's point of view the painter would die. Not only is the Pantheist view to idealistic and optimistic, but it simply cannot exist and is quite obstructed. When compared to three giants of philosophy and theology, Christianity holds strong. By using the simple words of the Bible you've seen the discrediting of Universalism, ultimately showing that, because of God's just nature, not everyone will be going to heaven whether he wants us to be with Him there or not, but we must first accept the gift provided by Him. With logic you've seen the numerous fallacies residing within Dualism. It now seems preposterous to even entertain the thought of two equally powerful forces in a never-ending war. And with the words of another philosopher you've seen the overly-idealistic nature of Pantheism, not to mention the absurdity of God residing in every substance and creature in the universe. When comparing other philosophies to Christianity, there is no competition. ...read more.