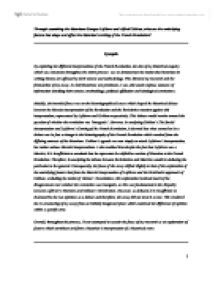 Through examining the historians Georges Lefebvre and Alfred Cobban, what are the underlying factors that shape and affect the historian's writing of the French Revolution

Lefebvre's contribution to the historiography of French Revolution was undoubtedly one that largely exemplified a Marxist interpretation of the events and its consequences. It became the Orthodox interpretation of the Revolution until the period of the late 1940s and 50s which was marked by the ideological polarization between capitalism and communism of the Cold War era. This initiated a new interpretation of the revolution through Alfred Cobban, "the father of revisionism", who challenged the dominance of the Marxist perspective from a British conservative stance. Alfred Cobban belonged to the school of historical revisionism and was an early authority on the revisionist interpretation of the Revolution. His legacy in the historiography of the revolution is his challenge to the Orthodox or Marxist perspective of the Revolution which Lefebvre represented, which had consequently earned him the title of "father of revisionism"13. This challenge was launched against the background of the period of 1950s- 60s which was marked by the momentous events of the Chinese Revolution, the subsequent Korean War and most importantly the Cold War. This period of ideological and political polarization between Marxism and Capitalism affected the profession of historical research and set the background of which Cobban launched his career of historical revisionism. Furthermore, by the mid 1950s, "the word on everyone's lips was 'revisionism": it is a word which best expresses the trembling of the Soviet statue on its pedestal"14 . Therefore, Cobban whose Revisionist career was set against this era would have been aware of the vulnerable, political stance of communism and the soviet. In response to this political climate, he sought to discredit the hegemony of the Marxist interpretation of the Revolution. He dismissively stated that the fundamental Marxist interpretation of the Revolution consisting of the passing of the feudal order and its replacement with the rule of the bourgeoisie is a "myth which has dominated serious research"15. Furthermore, his anti-Marxist approach was also motivated by his political position as a British conservative against this background of political divide. ...read more.

It was also particularly useful in that it covered a wide scope of Cobban's interpretation and provided summaries of the main issues that form Cobban's argument, as well as useful quotations in association with these issues. Perhaps the only weakness of this introduction was the evident bias she had towards him. The introduction evidently held the purpose of also proving his worthiness as a revisionist historian and his great impact on the historiography of the revolution. The next section of the book involved Cobban's discussion of the writing of social history and its complications. This was also very useful, as it was through these particular essays that I gathered his methodology. Furthermore, he criticized the methodology of Marxist historians and asserted the righteousness of his own. Despite this evident bias against Marxist methodology, it assisted in my understanding of Lefebvre's methodology. The bulk of the book involved the self-absorption of his own (Cobban's) methodology as he systematically attempts to demolish the Marxist interpretation of the revolution. Therefore, the overall worthiness of the book was its demonstration of the notion that a historian's context and methodology is inherently part of his historical writing. The parts of the text which most lacked objectivity were the most useful for the purpose of this essay. 2. Some 20th-century historians : Essays on eminent Europeans: Edited by William Halperin (University of Chicago Press, 1961) This source was invaluable in the shaping of my argument for Lefebvre. The book, as suggested by the title is a collection of essays about prominent 20th Century historians. The particular essay I relied heavily upon for this research is by Gordon McNeil on Georges Lefebvre. It provided information of his origin; his upbringing and education provided a sense of his early life and its impact on his later affliation with Marxism. The essay was furthermore useful in the detailing of his methodology, as well as providing examples of where it is applied. The second half of the essay consisted of exploring Lefebvre's philosophical viewpoint in conjunction with his methodology. ...read more.