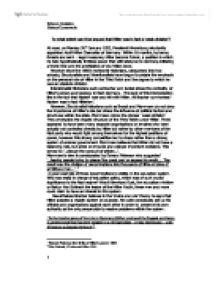 To what extent can it be argued that Hitler was in fact a 'weak dictator'? At noon, on Monday 30th January 1933, President Hindenburg reluctantly appointed Adolf Hitler Chancellor of Germany. Within 18 months, by terror, threats and semi - legal measures, Hitler became Fuhrer, a position in which he held hypothetically limitless power that ultimately led to Germany initiating a World War and the annihilation of six million Jews. However since the 1960's revisionist historians, categorised into two schools, Structuralists and Intentionalists have begun to debate the emphasis on the personal role of Hitler in the Third Reich and the degree to which he was an absolute dictator. Intentionalist Historians such as Bracher and Jackel stress the centrality of Hitler's person and ideology in Nazi Germany. The logic of this interpretation lies in the fact that Nazism rose and fell with Hitler. As Bracher summarised ' Nazism was in fact Hitlerism'. However, Structuralist historians such as Brozat and Mommsen do not deny the importance of Hitler's role but stress the influence of political factors and structures within the state. Mommsen coined the phrase ' weak dictator'. They emphasise the chaotic structure of the Third Reich under Hitler. There appeared to have been many separate organisations or empires who were actually not controlled directly by Hitler but rather by other members of the Nazi party who would fight among themselves for the highest positions of power, however this strong competition led to chaos rather than a strong system of ordered government. Mommsen believes that Hitler did not have a balancing role, but acted on impulse and delayed important decisions. This served to '...disrupt the conduct of affairs...'. Mommsen's view is corroborated by Edward Peterson who suggested' '...fearing people trying to please 'the great one' or escape his wrath.... The result was the division of denominations into thousands of little empires of ambitious men...' ...read more.

Although the Hitler Myth is generally considered to be completely successful it did have a negative aspect, it meant that Hitler would have been unable to take a hands on approach in order to retain the myth that he was above the people, again like a medieval monarch All this was closely related to Hitler's own views on the 'psychology of the masses', which he spoke of in Mein Kampf. He was aware of how important his 'omnipotent image' was to his leadership position and to the strength of his regime. In 1930, in an interview with Otto Strasser, a leading opponent within the Nazi party, Hitler summed up the thinking behind the use of Nazi propaganda; ' The mass of the working classes want nothing but bread and games. They will never understand the meaning of an ideal, and we cannot hope to win them over to one. What we have to do is select from new master-class men who will not allow themselves to be guided, like you by the morality of pity. Those who rule must know they have the right to rule because they belong to a superior race', This comment from Hitler and his clear understanding of the effects of propaganda and psychology is a definite area that highlights the belief that Hitler was a master dictator, this talent or ability almost certainly allowed him to progress to the extent that he did, However this could also be viewed as arrogance and demonstrates the cynical view that Hitler was interested in building a 'great Germany', not great people. Both schools of thought could argue the position on Hitler's popularity. From a structuralist's perspective it would seem that the people did not actually freely admire Hitler but were either terrorised into supporting him or manipulated into liking him so that what they thought were their own opinions were actually being fed to them via the media through Goebbels propaganda. ...read more.

Wasn't effective a governing. Overall the key issue encompassing the historical debate of master and weak dictator lies in I think how much influence the individual has in shaping history, and no-one can deny that Hitler had a colossal influence in shaping the course of history and was therefore I believe not a weak dictator. His role was far too central and important. In a very real sense Bracher was correct Nazism was in fact Hitlerism, in this respect the Intentionalists are correct, but neither was Hitler a strong dictator in the sense that he enjoyed direct control over the state and society which he led and in this sense Structuralists are right. Hitler was actually a dictator of a primarily different kind. His power did not dwell in his ability to issue direct commands or in his direct control over the party or state, quite the opposite, his power lay in the willingness of the Germans to 'work towards the Fuhrer' and his ability to manipulate millions, not just his own people, even Chamberlain said ' I got the impression that here was a man who could be relied upon when he had given his word.' In some respects his impression was correct as Hitler had a fixed programme from the 1920's until his last days in the Berlin bunker in 1945, and his actions were steered by an unwavering ideology. If I were to place myself in one of the schools of thought It would have to be Intentionalist, the main simplified reasoning for this decision is that like the majority of the German nation did, I find Hitler captivating especially his style of dictatorship, I believe that an individual that had the power to manipulate not only one country must have been a strong dictator. 1 Edward Peterson the limits of Hitler's power 1969 2 Otto Dietrich, 12 Jahre mit Hitler 1955 3 Post-war comments of Carl Schmitt, a constitutional lawyer, and Carl von Weizsacker, a foreign Office official. 4 Hans Mommsen ?? ?? ?? ?? Rebecca Gadsdon History Coursework 1 ...read more.