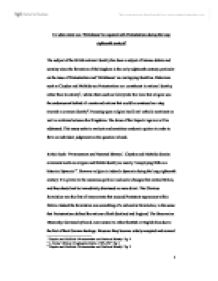 To what extent can Britishness be equated with Protestantism during the long eighteenth century?

To what extent can 'Britishness' be equated with Protestantism during the long eighteenth century? The subject of the British national identity has been a subject of intense debate and scrutiny since the formation of the kingdom in the early eighteenth century, particular on the issue of Protestantism and 'Britishness' as overlapping identities. Historians such as Claydon and McBride see Protestantism as a constituent in national identity, rather than its entirety1, whilst others such as Colley take the view that religion was the undercurrent behind all events and actions that could be construed as a step towards a common identity2. Focusing upon religion itself, anti-catholic sentiment as well as relations between the Kingdoms. The dawn of the Imperial age too will be addressed. This essay seeks to evaluate and scrutinise academic opinion in order to form an individual judgement on the question in hand. In their book 'Protestantism and National Identity', Claydon and McBride dismiss revisionist work on religion and British identity as merely 'overplaying faith as a historical dynamic'3. However religion is indeed a dynamic during the long eighteenth century: It is pivotal to the numerous political and social changes that created Britain, and thus should not be immediately dismissed as mere drivel. The Glorious Revolution was the first of many events that secured Protestant supremacy within Britain. Indeed the Revolution was something of a nationalist Revolution, in the sense that Protestantism defined the nations of both Scotland and England. ...read more.

The common bond between Scotland and England outweighed the differences; indeed the few references made to the differences were done in satirical fashion when the rebellion of 1745 was crushed. Tensions between the two nations would always be present - indeed it always has. But the bond between them, the struggle to build empire together and the growing power of their united nation was enough to cement a strong sense of cohesive identity. Protestantism acted as the bind of all these subjects, stressing that although different, the same. Yet by focussing upon the similarities, one ultimately searches for a common difference - even today, we see evidence of this from the multicultural hegemony of the British Isles that has continued to thrive since the Eighteenth Century. The often tyrannical approach to celebrating similarities often came interwoven with paranoia and hatred towards difference. The enemy in this time, the bad egg, were the Catholics not only in Britain but also across Europe. It was not to do with race, as we see the foundations of the Abolitionist movement occurring across the second half of the eighteenth century, but more the religion in question. Often a common enemy unites the public, indeed defines an identity for the period - the early part of the 20th century saw Britain united against the Hun of Germany as anti-German sentiment swept through. Catholics were the perceived threat during the eighteenth century, and thus received the expected treatment of indifference. ...read more.

The Imperial Identity provided a hollow shell, filled with the musings and values of the Protestant masses. Rather than risk creating religious tensions, Britain acted in the name of Britannia, in the name of a homogenous unit of peoples. This part of British identity acted somewhat as a protective measure, to protect from scrutiny as to whether the Imperialist policies were really so, or if this was the prelude to a crusade. The British Imperial Identity was one that took hold of the imaginations of the public, Britain becoming a powerhouse of the world. Yet this fire was stoked by the underlying Protestant overtones attached to this. The country itself had been formed on the basis of similarity between two different strands of the same religion. Wars abroad had been fought against Catholics in the name of Britain, in the name of Protestantism, colonial ventures were made in the spirit to civilise the savages of a non-Protestant world. Indeed it is clear that at the heart of the British man of the day, religion played a key role in knowing who he was. Yet this faith was aspirational in its outlook22, still harbouring discontent amongst Scots and Englishmen. Yet this is the basis, indeed the joy, of Britishness. It is not one, single, and, identifiable idea. It is a multitude of differing, often conflicting, vanities. To use Britishness and Protestant interchangeably would be a foolish outlook. It is far more accurate to say Protestantism was and is a faction, albeit a vital one, of the British Identity. ...read more.