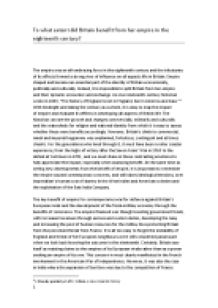 To what extent did Britain benefit from her Empire in the Eighteenth century?

﻿To what extent did Britain benefit from her empire in the eighteenth century? ________________ The empire was an all-embracing force in the eighteenth century and the tributaries of its effects formed a strong river of influence on all aspects life in Britain. Empire shaped and became an essential part of the identity of Britain economically, politically and culturally. Indeed, it is impossible to split Britain from her empire and their dynamic encounter and exchange. As one nineteenth-century historian wrote in 1883, ?The history of England is not in England, but in America and Asia.?[1] With hindsight and taking the century as a whole, it is easy to map the impact of empire and evaluate its effects in developing all aspects of British life. The historian can see the growth and changes commercially, militarily and culturally and the watersheds for religion and national identity from which it is easy to assess whether these were benefits accordingly. However, Britain?s climb to commercial, naval and imperial hegemony was unplanned, fortuitous, contingent and at times chaotic. For the generations who lived through it, it must have been a roller coaster experience, from the highs of victory after the Seven Years? War in 1763 to the defeat at Yorktown in 1781, and we must share in these contrasting emotions to fully appreciate the impact, especially when assessing benefit. At the same time as seeing new developments from the benefit of empire, it is important to remember the empire caused contemporary concerns, and still raises ideological tensions, over imperialism?s human cost of slavery in the West Indies and American colonies and the exploitation of the East India Company. ...read more.

Moreover, the Union of 1801 fully extended these rights, which probably was one of the only benefits Union bought to Ireland. The commercial bond of empire was much stronger than the bonds of union and without it, it much harder to see how tension could be soother for a British identity. The Repeal and Home Rule campaigns In Ireland, for instance, were always careful to disavow any intention of disrupting empire showing the extent to which the bond was valued. The commercial link was fragile as it was just as easily broken down as it developed. This was to lead to a break down with Ireland over renewed religious conflicts and perhaps even today with Scotland bid for own independence in the face of apparent lack in commercial gain from England. The empire had fortunately more than commercial and financial benefits, which are more easily neglected in the face of commercial and financial success. First and foremost, the empire developed a new and more broad-ranging culture and the gift of knowledge came from the periphery as well as tobacco and calicoes. Empire permeated British cultural life at many levels: literature, theatre, philanthropy, fashion, gardening and politics where all touched. Oriental motifs were adopted in literature and decorative arts and the effect of the empire left its heritage in British culture. At a higher intellectual level, empire provided also context for discovery and the pursuit of knowledge, spearheaded by the Royal Society and individuals, such as Boyle. Motives to improve navigation for commerce led to developed astronomy and cartography, such as the astronomical surveys at Madras, Calcutta and Bombay and the Trigonometrical Survey that was organised. ...read more.

It certainly provoked change and development, but seeing it in terms of ?benefit? seems false in the scope of instability and unrest it caused, and indeed wrong given the human cost that any advantage was built upon. This paradox affected the contemporaries as much as the historian today. Thus, rather than looking at it in terms of benefit, it is more helpful to analyse the empire from other angles and lenses. It is undeniable that the empire developed all spheres of life and left little untouched by its influence, but was it essential to British growth and development? Could Britain, for example, have industrialised without an Empire? Counter-factual history is always dangerous and its help limited, but I think it is clear that empire was a bedrock in all areas of development in the eighteenth century and that despite its cost, Britain would not be the same in identity, culture, economically or politically without it. It remains left to the individual as to whether this was beneficial or not. Linda Colley Britons: Forging the Nation (1992) P. Marshall, The Oxford History of the British Empire: The Eighteenth Century (1998) K. Wilson ed. A New Imperial History: Culture, Identity and Modernity in Britain and the Empire 1660-1840 (2004) D. Armitage, Greater Britain. Essays in Atlantic History 1516-1776 (2004) ________________ [1] J R Seeley quoted p.3 of K. Wilson A New Imperial History [2] P. Marshall, The Oxford History of the British Empire: The Eighteenth Century (1998) p.582 [3] Ibid. p.100 [4] The Spectator (1712) [5] P. Marshall, The Oxford History of the British Empire p.251 [6] Ibid p.149 [7] Ibid p.345 [8] Ibid p.vii ...read more.