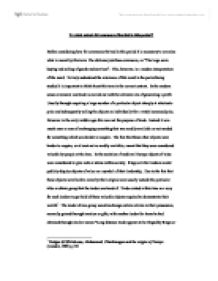 To what extent did commerce flourish in this period?

To what extent did commerce flourish in this period? Before considering how far commerce thrived in this period it is necessary to examine what is meant by this term. The dictionary defines commerce, as "The large scale buying and selling of goods and services". This, however, is a modern interpretation of the word. To truly understand the relevance of this word in the period being studied it is important to think about this term in the correct context. In the modern sense commerce and trade is carried out with the ultimate aim of generating a profit. Usually through acquiring a large number of a particular object cheaply at wholesale price and subsequently selling the objects on individually for a vastly increased price. However in the early middle ages this was not the purpose of trade. Instead it was much more a case of exchanging something that was readily available or not needed for something which was harder to acquire. The fact that these other objects were harder to acquire, or at least not as readily available, meant that they were considered valuable by people at the time. In the societies of medieval Europe objects of value were considered to give rank or status within society. Kings or tribal leaders would publicly display objects of value as a symbol of their leadership. Due to the fact that these objects were hard to come by their origins were usually outside the particular tribe or ethnic group that the leader was head of. ...read more.

Whereas to a potter or other craftsman food was more valuable as it was harder for them to get hold of. So it is easy to see how a pot might be exchanged for a supply of grain. The man with the grain needed the pot to keep his grain in and the potter needed the grain to feed himself and his family. However with the decline in agricultural produce this type of trade would cease to exist. The fact that the roman fleets no longer dominated the Mediterranean also gives a clue to the level of trade at this time. Instead of the Romans it was now the Arab fleet that dominated the Mediterranean Sea. To the Romans the Mediterranean was seen as both safe and familiar. It was the quickest way to transport goods to France and the rest of Europe. However, once the Arabs had control it was no longer viewed in the same light. Even the ports on the coast were soon considered unsafe places by contemporaries given the number of Arab raids on them. Consequently trade in these ports dried up. As well as this the trade routes to the ports were also abandoned, as they no longer served a purpose. The routes to the coast from central Europe and central Italy were important economic and social linkages. With the break down of this infrastructure, however basic it may have been, communities and societies began to look inwards and become more self-sufficient. ...read more.

This is clear evidence of growth of trade. Perhaps the most notable example of increasing trade in this period is Charlemagne's cathedral at Aachen. To complete this construction he had marble transported from Rome. This along with the large number of valuable objects to be found inside the Cathedral would also seem to point towards an increase in trade at this time. However, the fact that he himself had to have the marble transported actually shows that trade was still in a weakened state compared with Roman times. If trade was flourishing in this period then the marble would already be present somewhere closer than Rome. Trade can indeed be seen to have grown during and following the eighth century but this is only relative to the period before. There are two further arguments against a view that trade flourished in this period. Firstly compared to the Roman Empire, where trade was abundant, the volume of trade is still relatively small. Secondly, throughout much of the period under consideration trade was practically non-existent following the fall of the Romans. In conclusion trade did not flourish in this period. It is fair to say that there was a period of growth after 700 but this was preceded by a period of considerable decline; therefore the growth that was taking place started from practically zero and was not sufficient to return commerce to the levels enjoyed by the Romans. However this growth is important as it paved the way for the rapid expansion and flourishing trade which can be seen at the turn of the millennium and thereafter. ...read more.