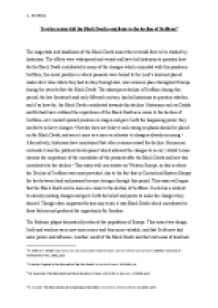 To what extent did the Black Death contribute to the decline of Serfdom?

The Ordinance of Labourers of 1349 and the Statute of Labourers Act of 1351 had the direct intention of preventing high wages from being achieved and keeping Serfs attached to land. Prosecutions under these acts, where landlords were prosecuted for paying wages far in excess of the maximum allowed, add more weight to this argument.[10] This displays that even the law could not prevent this transformation, and shows the lengths employers would go to receive labour. Furthermore, employers found ways around the legislation; employees were paid in cash and in kind. It was commonplace for ?with food? deals to be made or gifts worth large amounts of money given to substantially raise the average wage rate. An example of this would be in Whitney in 1363, where winnowers were given curall wheat worth 30s on top of their wages, which extended their piece-rates from 5 1/4d to 8d per task.[11] The influence of the Serfs becomes clear and the power was shifting from the landlord to the Serfs. It is clear that the aspirations of Serfs and the declining nature of Serfdom was already occurring before the post-plague period. In Bologna, Italy, emancipation of the Serfs was already achieved in 1256.[12] In addition to this, in England, Serfdom had already tended to decline, many peasants were free before the Black death with ...read more.

The road to emancipation had been paved long before the bubonic plague hit Europe. However, the Black Death was an important contributory and direct factor to its development of the decline. The Black Death reduced population, especially in the labour force, which meant Serfs became more valuable and gave the peasants the power to exercise the already existing desire for freedom. This was shown through their demand for higher wages, less working hours and freedom of movement. Serfdom values were being directly challenged.. Historians such as Bridbury and Hatcher have argued the impact of the Black Death has been exaggerated and was minimal. However, the legislation in the years following the Black Death and accounts of contemporaries of the time provide strong evidence to disprove this thesis. Furthermore its effects on other main factors contributing to the decline of Serfdom confirm the role of the Black Death in affecting and accelerating the process in declining Serfdom. For example, the peasants themselves have been given great credit for their own freedom through their persistence, and the political alterations which meant changes, on a greater scale, could occur. Both of these factors were affected by the Black Death in giving the peasants the power and opportunity to exercise their beliefs, thus creating the political change. The Black Death therefore directly contributed by reducing the population and, as a secondary factor, by giving the peasants the ability to persist for, and force, change. ...read more.