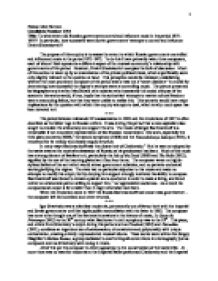 To what extent did the Tsarist and Soviet governments control and influence music in the period 1875-1975?

Name: Max Norman Candidate Number: 0785 Title: To what extent did Russian governments control and influence music in the period 1875-1975? In particular, how successful were Soviet governments' attempts to control and influence Dmitri Shostakovich? The purpose of this enquiry is to assess the extent to which Russian governments controlled and influenced music in the period 1875-1975. To do this I have primarily taken three composers, each of whom I feel represents a different aspect of the musical community's relationship with governments of this period. However, Dmitri Shostakovich occupies the bulk of discussion. Much of this section is taken up by an examination of his private political views, which superficially seem only slightly relevant to the question at hand. This perception would be mistaken: establishing whether the most prominent composer of the period was or was not a "secret dissident" is crucial for determining how successful the r�gime's attempts were at controlling music. The picture presented by biographers such as Ian MacDonald of a musician who incessantly hid coded critiques of the system in his works would, if true, imply that the authorities' attempts to restrict cultural freedom were a resounding failure, but that they were unable to realise this. This scenario would have major implications for the question with which this enquiry attempts to deal, which is why much space has been devoted to it. * * * The period between Alexander II's assassination in 1881 and the revolutions of 1917 is often described as the Silver Age in Russian culture. It was during this period that a new capitalist class sought to emulate the aristocracy and support the arts. The music of Sergei Rachmaninoff is a remarkable if not innovative representation of late Russian romanticism. His work, especially the third piano concerto (1909),1 the second symphony (1908) and the Vsenoshchnoye bdeniye (1915), is renowned for its melody and closely-argued structure. In many ways Rachmaninoff was the closest heir of Chaikovsky.2 But he was not adopted by the tsarist state as the musical ambassador of Russia, as his predecessor had been. ...read more.

13 "Babi Yar" in B-flat minor (1962). By Yevgeny Yevtushenko. See above for discussion. The altered passages are four lines near the beginning and another four towards the end: Original: I imagine now that I am a Jew. Here I wander through ancient Egypt. And here, I am crucified on the cross and die, And still bear the marks of the nails... And I become like a long, soundless scream Above the thousand thousands here interred. I am each old man shot dead here, I am each child shot dead here. Replacement: I stand there as if at a wellspring, That gives me faith in our brotherhood. Here lie Russians and Ukrainians With Jews they lie in the same earth. I think about Russia's heroic feats, In blocking fascism's path. To the very tiniest dewdrop, Her whole essence and fate is dear to me.46 appendix two: letter from Dmitri Shostakovich to Isaak Glikman, December 29th 1957: Dear Isaak Davidovich, I arrived in Odessa on the day of the All-Peoples celebration of the 40th anniversary of Soviet Ukraine. This morning, I went out into the street. You, of course, understand that one cannot stay indoors on such a day. Despite wet and foggy weather, the whole of Odessa was out of doors. Everywhere are portraits of Marx, Engels, Lenin, Stalin, and also of comrades A. I. Belyaev, L. I. Brezhnev, N. A. Bulganin, K. E. Voroshilov, N. G. Ignatov, A. I. Kirilenko, F. R. Kozlov, O. V. Kuussinen, A. I. Mikoyan, N. A. Mukhitdinov, M. A. Suslov, E. A. Furtseva, N. S. Khrushchev, N. M. Shvernik, A. A. Aristov, P. A. Pospelov, Ya. E. Kalnberzin, A. P. Kirichenko, A. N. Kosygin, K. T. Mazyrov, V. P. Mzhevanadze, M. G. Pervukhin, N. T. Kalchenko. Everywhere are banners, slogans, posters. All around are happy, beaming Russian, Ukrainian, Jewish faces. Here and there one hears eulogies in honour of the great banner of Marx, Engels, Lenin, Stalin, and also in honour of comrades A. I. Belyaev, L. I. ...read more.