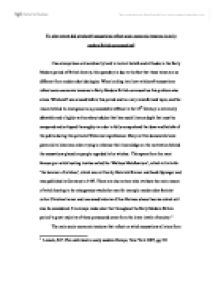 To what extent did witchcraft accusations reflect socio-economic tensions in early modern British communities? I has always been extraordinarily hard to look at beliefs and attitudes in the Early Modern period of British history, this quandary is due to the fact that these views are so different from modern day ideologies. When looking into how witchcraft accusations reflect socio-economic tensions in Early Modern British communities this problem also arises. Witchcraft was around before this period and is a very misinformed topic, and the reason behind its emergence as a prosecutable offence in the 16th Century is extremely debatable and a highly written about subject that has much literary depth that must be compared and critiqued thoroughly in order to fully comprehend the ideas and beliefs of the public during this period of Historical significance. Many written documents have given aid to historians when trying to enhance their knowledge on the motivation behind the accusations placed on people regarded to be witches. This spans from the most famous pro-witch hunting treatise called the 'Malleus Maleficarium', which is Latin for 'the hammer of witches', which was written by Heinrich Kramer and Jacob Sprenger and was published in Germany in 1487. There are also writers who attribute the main reason of witch hunting to be misogynous attacks by men for example modern day feminist writer Christina Larner and renowned historian Clive Holmes whose theories which will also be considered. ...read more.

Arguably the most written about and disputed theory that witchcraft is associated with is misogyny. The reason that this is a plausible philosophy is clearly linked to the fact that ninety percent of the accused were female, this would strongly imply that social factors played a strong factor in the accusation process. Popular beliefs at the time were that women were weak and had a strong capacity for evil and also cases would often be a result of feminine disputes. This concept is backed up by the witchcraft treatise the Malleus Maleficarium which in section one suggests that women had sex with the devil, which in turn led to them assuming the powers of a witch and it states in the Malleus "all witchcraft comes from carnal lust, which is in women insatiable."6 This leads to the presumption that sexist prejudice was clearly evident at this time and it is strongly emphasised throughout this treatise which suggests the roots of prosecuting witches had some levels of ignorance that influenced them. The treatise was extremely widespread in Germany due to the fact that it was fortunate enough to be duplicated via the newly invented printing press and this meant that it was read by the masses and could be considered to be propaganda. ...read more.

To conclude there are many interesting and opinionated views on the reasoning behind witchcraft accusations in Early Modern Britain. The label of 'socio-economic tensions' as name for most of these alleged reasoning's appears to be a sufficient one. This can be said after much research because the main reasons behind witchcraft allegations appears to be the accused social status and how the higher classes feared them, the accused gender and how women were alleged to ninety per cent of the accused also issues such as the accused marital status have shown as significant in the prosecution of witches. There are however some notions that do not fall under the class of socio-economic such as the religious beliefs of the accusers and also political views such as James I belief in witchcraft that was shown by his attempt to remove Reginald Scot's skeptical view on witchcraft from literature by having all obtainable copies burnt. There is a suggestion that ignorance is the main reflection that can be withdrawn from witchcraft allegations but this essay shows that it is mainly down to a different period in history that had a completely dissimilar set of social, economic, political and religious views from the ones that exist in today's society. ...read more.