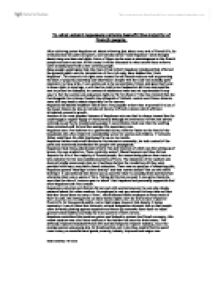 To what extent napoleons reforms benefit the majority of French people

To what extent napoleons reforms benefit the majority of French people. After achieving power Napoleon set about reforming just about every aria of French life, he revolutionised the political system, and introduced the 'Code Napoleon' which brought about many new laws and rights. Some of these can be seen as advantageous to the French people and some can not. In this essay it will be discussed to what extent these reforms were actually beneficial to the common people. Many people would agree that the most critical reform Napoleon introduced that affected the general public was the introduction of the civil code, later dubbed the 'Code Napoleon'. This insured civil rights were insured for all French males as well as governing the laws of property ownership and inheritance. ...read more.

this was almost certainly to pacify the revolutionary people it nevertheless made sure that the working class remained well fed and the average life expectancy rose. Napoleon was a firm believer in a patriarchal society with the father at the head of the household, this often made life considerably worse for woman and children, if inclined a father could have his child imprisoned for up to six months. Napoleon further restricted liberties be his extensive censorship, he took control of the press and extensively bombarded his people with propaganda. Napoleon made many educational reforms first and foremost of which was the setting up of lycees, his own academies. These certainly weren't liberal however and they did not improve the life of the majority of French people, the reason being places were more or less exclusive for the sons notables and army officers. ...read more.

to keep track of them as well, this infringement on basic human rights can't be said to have improved French life for the general public, some might argue however that despite it being repressive it was in there best interests; several assignation attempts tell up that people were defiantly plotting against napoleon and these spy networks were there to insure governmental stabilise and help the more positive reforms remain. Napoleon centralised the taxation system and helped to restore the French economy, this meant taxation was a lot fairer and less of the burden fell onto the third estate. This defiantly improved standard French life and also helped to improve industry, since the average person was paying less for bread and less out in tax they could afford to spend more money on manufactured goods, meaning industry improved and wages rose. Stefan Duberley- 715 words ...read more.