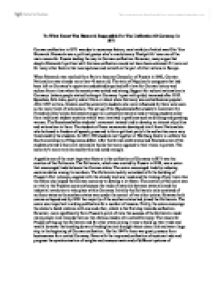 To What Extent Was Bismarck Responsible For The Unification Of Germany In 1871 German unification in 1871 was due to numerous factors, most notably of which was Otto Von Bismarck. Bismarck was a political genius who's revolutionary 'Realpolitik' was one of the main reason for Prussia leading the way in German unification. However, many argue that despite Bismarck's political skill German unification would not have been achieved if it were not for many other factors like incompetence and naivet� on the part of other nations in Europe. When Bismarck was recalled from Paris to become Chancellor of Prussia in 1862, German Nationalism was already more than 40 years old. The stain of Napoleon's conquests that had been left on Germany's reputation undoubtedly sparked off a love for German history and culture from a time when the country was united and strong. Support for cultural nationalism in Germany (where people started looking at Germany 's past with pride) increased after 1815. Speeches, folk-tales, poetry and art from or about when Germany was united became popular. After 1815 writers, thinkers and the university students who were influenced by them were seen as the main threat of nationalism. The set up of the Burschenshaften student's movement by Freiedrich Jahn's (who believed strongly in a united Germany) aimed at taking students away from traditional student societies which were involved in pastimes such as drinking and pursuing women. The Burschenshaften students' movement instead tried to develop an interest of politics and nationalism in them. ...read more.

The Prussian constitutional crisis occurred in 1860 over the passing of a bill that proposed that military expenditure and resources should be increased significantly. The liberals saw the increase in the army as a very real threat as the army bred men unquestionably loyal to the king and they had been used against them in the past. Due to this the majority of the liberals refused to support the bill and it was rejected. The king tried again, however his attempts once again came to nothing. It was at this point that Bismarck was appointed as Chancellor of Prussia. Initially he tried threats to resolve the crisis, however these were unsuccessful. Bismarck then discovered a flaw in the Prussian constitution that allowed him to pass the act without the support of all the liberals. This allowed the King to collect the taxes needed without the consent of the Liberals. The King was eternally grateful and gave Bismarck more or less complete control over the running of Prussia. Bismarck's real masterstroke was the way he manipulated the Schleswig Holstein incident to aid German unification. The incident came about because of a dispute over succession in the Duchies. Eventually in 1864 Prussian and Austria invaded the Duchies because the Danes broke the agreement that they had made in the London Protocol. At first the two States were governed jointly by Austria and Prussia, however this did not work well and at the conference in Gastein in 1865 it was agreed that Austria would rule Holstein and Prussia would govern Schleswig. ...read more.

This once again illustrates Bismarck's ability to manipulate situations to help to achieve his goal of unification. However it demonstrates how incompetence on the behalf of other nations was also a cause. France declared war on Prussia on the 19" of July. Prussia's army was far superior to that of the French and on the 6 of August they defeated the French at Worth and Spichern and from then on the French were on the defensive. The French finally surrendered on the 27~" of October 1870. The peace settlement, unlike with Austria, was incredibly harsh. The French were ordered to pay 200 million pounds in reparations and had to give up the regions of Alsace and Lorraine. The main achievement of this war was that it brought the Southern States closer to Prussia because with out the support of Austria they had no one else to look to for protection. Although this move towards unification is mostly due to the stupidity of the French it would not have been possible without Bismarck's shrewd political skill. Bismarck is undoubtedly a very significant factor in the Unification of Germany in 1871. This is shown by his skill in manipulating incidents such as the wars against France and Austria. However it would be incorrect to say that Bismarck was solely responsible for the unification of Germany because there were other factors that also aided unification, for example the Zollverein. Also Bismarck made no efforts to stop some of the deep rooted divisions which prevented unification such as the In conclusion Despite Bismarck's important role in German unification there were other factors, apart from those created by Bismarck, that were equally important. ...read more.