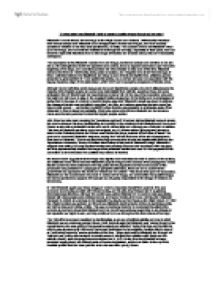 To what extent was Elizabeth I able to create a positive image throughout her reign?

To what extent was Elizabeth I able to create a positive image throughout her reign? Elizabeth I is most famous for her image as the Virgin Queen and Gloriana. Until recently historians have almost always seen Elizabeth as an amalgamation of these two images, and have scarcely questioned whether or not they were just illusions, or reality. The question of how well Elizabeth I lived up to her image, and how well she maintained it throughout her reign, especially in later years, has now become a topic that historians have a wide range of theories and answers about, that don't necessarily correspond. The assumption is that Elizabeth I created her own image, but there is debate over whether or not she did so. She strengthened it with her speeches and actions, but to a degree it was forced upon her at the beginning of her reign, and councillors advised her what direction to take a lot of the time. Elizabeth came to the throne in 1558 having being called a bastard, and "daughter of a whore" from the age of three. Catholics believed her illegitimate and Mary Queen of Scots the rightful heir, whilst her gender presented a great problem in Tudor patriarchal society. As a woman she was now associated with the largely disastrous reign of her sister Mary I, which didn't add to people's acceptance of female rulers. ...read more.

In 1560 the Clopton portrait was painted, and this shows Elizabeth wearing black, ermine (to symbolise purity and right to rule) and holding a bible. This was undoubtedly intended to counteract the effect of the rumours at court and shows that Elizabeth and her council were actively responding to any threats to her reputation as Virgin Queen, and they continued to do so throughout the first decade of her reign. The 1560-80's have been described by traditionalists as an age of political stability and one in which Elizabeth was an extremely popular Queen. Keith Randell says that Elizabeth was "widely thought of as a great leader who was worthy of her people's support and affection" during this time, and the fact the country was at peace until 1588 would have been celebrated by her subjects. Geoffrey Elton's view of an "accidental monarchy" seems probable at this time. Things went well for Elizabeth and through her "wait and see" policy she managed to remain secure in all apart from relations with Spain and the catholic church, when the pope excommunicated her in 1572. During this time Elizabeth's image remained largely intact, but different parts of it were emphasised, as she had failed to live up to the idealistic portrait that had been painted when she was still a young Queen. ...read more.

She became less and less able to keep a grip on men such as the Earl of Essex, who increasingly did as he wanted (eg: Ireland) and he rebelled. Some revisionist historians believe that the public took a shine to the new male role models, and the evidence certainly points that way: "the Council had to prohibit the engraving of pictures of Essex and other nobles." Elizabeth and her Council successfully created and maintained an image of a Queen who lived for and embodied England, and this endured until the 1590's when, with the death or retirement of most of those councillors, it is hardly suprising that the image failed to convince and became more negative. I am inclined to think that it was more of an illusion than the truth that traditionalist historians have been proclaiming since William Camden in the 1630's. Traditionalists have always had their own priorities when writing of Elizabeth:-Camden wanted to impress James I, and others have been influenced by the work which has gone before. Elizabeth's image was more of a smokescreen, but that is no different to the politicians who are in power today, and it has always been the way. Elizabeth's image was taken as the truth for about 30 years of her 45 year reign, and that is more successful than any other ruler has ever been. ?? ?? ?? ?? ...read more.