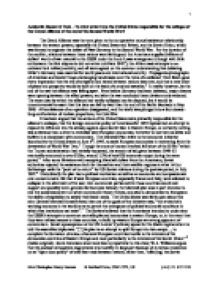 To what extent was the United States responsible for the collapse of the Grand Alliance at the end of the Second World War?

Academic Research Task - To what extent was the United States responsible for the collapse of the Grand Alliance at the end of the Second World War? The Grand Alliance was the term given to the co-operative mutual assistance relationship between the western powers, especially the United States and Britain, and the Soviet Union, which was formed to engineer the defeat of Nazi Germany in the Second World War. For the duration of the conflict, relations between these nations were fairly good: the Americans supplied billions of dollars' worth of war material to the USSR under the Lend-Lease arrangement (though with little enthusiasm: the first shipments did not arrive until late 19421), the Allies made attempts to co-ordinate their military activity, and all were agreed on the common understanding that defeating Hitler's Germany was essential for world peace and international security. Propaganda photographs of American and Soviet troops exchanging handshakes over the ruins of a defeated Third Reich gave every impression that the era of antipathy and hatred between nations was over, and that a new order of peace and prosperity would be built on the back of a crushed swastika.2 In reality however, by the end of the war the alliance was falling apart. Even before Germany had been defeated, major chasms were opening between the allied powers, and after the war concluded these divisions only widened. The exact date by which the alliance had totally collapsed can be disputed, but it would be uncontroversial to assert that this date can fall no later than the end of the Berlin blockade in May 1949. All semblances of co-operation disappeared, and the world was plunged into a four decade-long confrontation of nuclear proportions, the Cold War. It has been argued that the actions of the United States were primarily responsible for the alliance's collapse, that the foreign economic policy of America after 1945 represented an attempt to expand its influence into the already-agreed-upon Soviet bloc in Eastern Europe, or certainly nothing less ambitious ...read more.

that.* With respect to Poland especially, Stalin had already shown his contempt for national democracy movements by allowing the Wehrmacht to crush the Warsaw uprising in August-October 1944, and had a pro-Soviet puppet government ready and waiting to take over from the German authorities.18 Previous Soviet treatment of Finland and the Baltic states gave every indication needed of how Stalin would react to attempts made at installing democracy in other countries. Nevertheless, the Yalta communiqu� produced from the conference was an unequivocal assertion of the right of east European states to free elections. Section V pledged all of the allied powers, including the Soviet Union, to "the earliest possible establishment through free elections of Governments responsive to the will of the people", and asserted "the right of all people to choose the form of government under which they will live".19 It does not need to be repeated that Stalin never had any intentions of carrying out the requirements of this passage. Immediately after the war the leaders of national communist parties, many of whom had spent the pre-war and wartime years in exile in Moscow and had long been subdued under Stalin's whip, began their gradual accumulation of power. Invariably, the communists would contest a free-ish election under the auspices of the Red Army, win a minority of the vote (as little as 17% in Hungary and never more than 38%, in Czechoslovakia), and then agree to take part in a coalition government. Under pressure from Stalin, their rivals would agree to give communists control of ministries of justice and of the interior, which would then be used to "disappear" political opponents. In Poland the Soviet puppets' methods were less subtle: a massive campaign of violence and intimidation preceded the first postwar elections in 1947, and the communists claimed 80% of the vote.20 Despite assertions by some historians that western leaders "handed over" Eastern Europe to the Soviets at Yalta, short of a full-scale war with the USSR there was little if anything Roosevelt and Churchill could have done to prevent Stalin from turning eastern European countries into satellite states. ...read more.