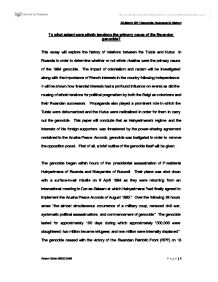 To what extent were ethnic tensions the primary cause of the Rwandan genocide?

To what extent were ethnic tensions the primary cause of the Rwandan genocide? This essay will explore the history of relations between the Tutsis and Hutus in Rwanda in order to determine whether or not ethnic rivalries were the primary cause of the 1994 genocide. The impact of colonialism and racism will be investigated along with the importance of French interests in the country following independence. It will be shown how financial interests had a profound influence on events as did the rousing of ethnic tensions for political pragmatism by both the Belgian colonizers and their Rwandan successors. Propaganda also played a prominent role in which the Tutsis were dehumanized and the Hutus were radicalized in order for them to carry out the genocide. This paper will conclude that as Habyarimana's regime and the interests of his foreign supporters was threatened by the power-sharing agreement contained in the Arusha Peace Accords; genocide was instigated in order to remove the opposition posed. First of all, a brief outline of the genocide itself will be given. The genocide began within hours of the presidential assassination of Presidents Habyarimana of Rwanda and Ntaryamira of Burundi. Their plane was shot down with a surface-to-air missile on 6 April 1994 as they were returning from an international meeting in Dar-es-Salaam at which Habyarimana "had finally agreed to implement the Arusha Peace Accords of August 1993." Over the following 24 hours arose "the almost simultaneous occurrence of a military coup, renewed civil war, systematic political assassinations, and commencement of genocide." The genocide lasted for approximately 100 days during which approximately "500,000 were slaughtered; two million became refugees; and one million were internally displaced." The genocide ceased with the victory of the Rwandan Patriotic Front (RPF) on 18 July 1994 in the civil war which ran parallel to the genocide.1 In order to understand these events, Rwanda's 19th and 20th century histories will be explored paying particular attention to ethnic rivalries. ...read more.

Elites in the lead up to the Rwandan genocide employed "social myths" which, according to Smith are based on "assumptions, perceptions and images about the world that are widely shared with others". There is a strong comparison here with Nazi Germany in that "the Nazis were masters at socially constructing enemies, but could not have succeeded without a base of everyday antisemitism from which to launch their campaigns".33 Mamdani further reiterates this point when he states that: "there is a link that connects the genocide of the Herero and the Nazi Holocaust to the Rwandan genocide. That link was race branding, whereby it became possible not only to set a group apart as an enemy, but also to exterminate it with an easy conscience."34 As previously discussed, the Tutsis were seen as the "settler" race and this provided further justification for their ill-treatment during the post-colonial period. A comparison can be made here with the Jews of Nazi Germany who were themselves seen as the settlers.35 In both cases, these two final solutions were what Franz Fanon refers to as "violence to end violence."36 The use of propaganda to instigate ethnic violence was thus an extremely powerful tool in the years preceding and during the 1994 genocide. Not only because of the existing ethnic tensions but also because of the high illiteracy rate of the peasant Hutu majority and also the wartime restrictions on movement that were put in place supposedly because of the continuing civil war between the RPF and the national army - Les Forces Arm�es Rwandaises (FAR).37 Journalist Fergal Keane describes his reaction to the Rwandans during the genocide as follows: "A few gave the impression of being truly psychopathic individuals. The mass of others were ragged and illiterate peasants easily roused to hatred of the Tutsis."38 The fact that the Tutsi were portrayed in the lead up to the genocide as still being an oppressing elite was clearly ridiculous due to their mass exodus from the country at various points ...read more.

Always using one faction to dominate and oppress the other. The Arusha Peace Accords, had they been allowed to be implemented fully, would have seen a reversal of this trend and caused a change in attitudes and peaceful co-existence to occur. It is for this reason that the 1994 Rwandan genocide is often referred to as the "preventable genocide."72 The overturning of the traditional Tutsi hegemony in 1959 was a decisive factor which created the first wave of ethnic violence and consequential refugee crisis to occur. From this point forward ethnic rivalry would become engrained and yet the high levels of intermarriage would suggest otherwise. France's neo-colonial support for the successive Hutu-majority dictatorships from 1962 onwards played a vital role in providing military and political support for the "democratic" government. This was a classic case of "the tyranny of the majority" of which de Tocqueville famously spoke of.73 De Gaulle's wish to promote Francophone cultural and political advancement; as well as Mitterrand's financial interests precipitated this. The coffee crisis of the late 1980's meant Habyarimana could no longer buy the peasant's loyalty with farming subsidies so began instigating violent ethnic hatred amongst the population. Due to the authoritarian nature of Rwanda's political system, the Rwandans were easily provoked by the MRND's hate propaganda machine. This was further expedited by the Hutus' lack of education and access to free information. So was ethnic hatred the primary cause of the genocide? In short yes it was. But crucially this was set off by the flip in power relations brought about in 1959 and by successive independent governments in order to retain power. Ethnic tensions had undoubtedly existed since pre-colonial times but were certainly nowhere near the height to which they would become thereafter. The 1994 genocide was coordinated by the MRND, and aided and abetted by France and her allies in order to maintain their mutual interests in the Rwandan state. In the end, Habyarimana was the first casualty of his own genocide, which he and his supporters, both at home and abroad, orchestrated in order to maintain their political and financial interests. ...read more.