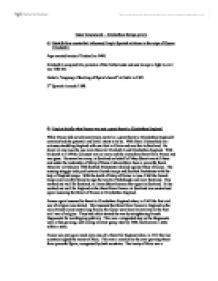 Tudor Coursework - Elizabethan foreign policy. (a) Identify four events that influenced Anglo-Spanish relations in the reign of Queen Elizabeth I. Pope created treaty of Tordesillas 1498. Elizabeth I accepted title protector of the Netherlands and sent troops to fight in civil war 1585-86. Drake's "singeing of the king of Spain's beard" at Cadiz in 1587. 2nd Spanish Armada 1588. (b) Explain briefly why France was not a great threat to Elizabethan England. While France did not ultimately turn out to be a great threat to Elizabethan England it certainly had the potential and initial intent to be so. With Henri II described as a colossus straddling England with one foot in Calais and one foot in Scotland. He above all else was the one main threat to Elizabeth I and Elizabethan England. With his death in 1559 the Colossus was no more and the immediate threat from France and was gone. However her army, in Scotland on behalf of Mary Stuart was still there and under the leadership of Mary of Guise it should have been a powerful threat. However in February 1560 Scottish Protestants rebelled against Mary of Guise. The ensuing struggle took part between French troops and Scottish Protestants with the help of English troops. With the death of Mary of Guise in June 1560 the French troops were swiftly forced to sign the treaty of Edinburgh and leave Scotland. This worked out well for Scotland, as James Stuart became the regent in Scotland. It also worked out well for England as the threat from France via Scotland was neutralised again lessening the threat of France to Elizabethan England. France again lessened its threat to Elizabethan England when, in 1562 the first civil war of religion was started. ...read more.

Philip II's intent to invade England can now be seen in very clear religious terms as he wanted to invade England, a Protestant country and turn it Catholic. Throughout the reign of Elizabeth I Spain's power in Europe was ever increasing. Infact Spain was described as the guiding star of Tudor foreign policy. There was little wonder then that Elizabeth and Philip ended up having a complex relationship. The main area of squabbling in Europe was the Netherlands. Very important economically to both countries the Netherlands had a long relationship with England in trade. The Netherlands became Spanish in 1516 through marriage. Traditionally left alone to trade, the Netherlands had become a rich cornerstone of the Spanish Empire. Philips worry over Protestants in the Netherlands led to hard leadership. Cardinal Granvelle was the first regent, his powerful dominance led to the apprentices bread and wages riots of 1566. Told these riots were a Protestant uprising Philip sent in the Duke of Alva with the Spanish army to stamp them out. This act sparked the civil war in the Netherlands. The "council of blood" arrested most of the state leaders and leading merchants, 2000 of which were killed. The state leader of Holland, William the silent became the leader of the rebels. William the silent became Protestant in 1572 and appealed to Elizabeth for troops and money. Elizabeth supplied money but no troops as she felt direct intervention would weaken trade links with the Netherlands. Elizabeth's relationship with Philip II is damaged by her aid to the Netherlands. Their relationship was damaged further when in 1585 Elizabeth agreed to be the protector of the Netherlands and in 1586 sent troops to fight on the side of the rebels. ...read more.

It may be argued that Elizabeth's foreign policy in Europe failed, and it was only outside factors that allowed Elizabeth to retain power. However the fact that Elizabeth survived may suggest her foreign policy was a successful one. Elizabeth's foreign policy towards Spain in attempts to prevent Spanish intervention in England may also be looked at in two ways. On one hand all the plots against Elizabeth; rising of the northern earls, Ridolfi, Throckmorton, Parry and Babington never massed the support they proclaimed and never got near to overthrowing Elizabeth. This may be regarded as a success. However, the failure of one plot did not stop another from being formed, a possible weakness of foreign policy. In similar circumstances the fact that none of the five armadas launched against England were successful may be regarded as a good foreign policy. However, the fact that none of the armadas were successful may also be put down to outside factors that would not constitute a good foreign policy. For example the 2nd armada of 1588 was largely ineffective, not because of the English navy but largely due to bad weather conditions and a lack of fleet manoeuvrability, two factors outside the control of Elizabeth. It is hard to directly answer the question "was Elizabeth's foreign policy towards Spain a success" as to answer the question a definition of success would first be needed. In many circumstances Elizabeth's foreign policy was a success for the simple fact that England was not invaded by Spain during Elizabeth's reign. It may be argued that this dodging of a Spanish invasion was all that Elizabeth could hope for but it often came down to a large amount of luck that prevented England from being invaded. ...read more.