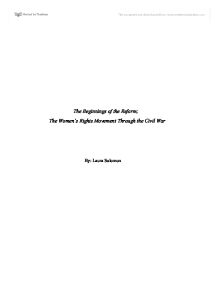 US History. The Womens Rights Movement Through the Civil War.

The Beginnings of the Reform; The Women's Rights Movement Through the Civil War By: Laura Solomon For three fourths of a century, American women centered their aspirations for freedom and power for the vote. Along with the black liberation and labor movements, women suffrage is on of the three great reform efforts in the American History1.If it weren't for the women's movement I would not be enrolled in school right now, and I certainly would not be writing this research paper. I catch myself taking things for granted way to often, and it is important to understand the degree in which women took to transform their lives. They had to deal with changes in their family, relation to society, and women's role within it. It took a handful of women to come together and help, but the beginning of the reform is where is all started. A number of women who got the reform going included; Lucretia Mott, Elizabeth Cady Stanton, Susan B. Anthony, and Lucy Stone. These women help Lead to the birth of the women's right movement, The Seneca Falls Convention. This was the ultimate launch of the movement that these women did not only for themselves by theirs daughters and women throughout the world. Just like Elizabeth Cady Stanton declared on the first generation of suffragists, "We solemnly vowed, that there should never be another season of silence until women had the same rights everywhere on this green earth, as man." She was determined and refused to let anything get in her way along with the many other women who helped this fight.2. Though the fight is best summed up by Carrie Chapman Catt and Nettie Rogers Shuler: Hundreds of women gave the accumulated possibilities of an entire lifetime, thousands gave years of their lives, hundreds of thousands gave constant interest and such aid as they could. It was a continuous, seemingly endless, chain of activity. ...read more.

13Duncan, Shapers of The Great Debate on Women's Rights, 48. 14Ibid,. 49. 15Dubois, Feminism and Suffrage, The Emergence of an Independent Women's Movement in America, 46. 16 Duncan, Shapers of The Great Debate on Women's Rights,49. Elizabeth Cady Stanton was a well-educated daughter of a prominent New York judge and an early supporter of the abolitionist movement. Even as a child she was spunky, argumentative, and uncompromising in her convictions as well as being compulsively talkative and persuasive.17 She questioned not only the judgment of her family and the family servants but also the justice system and the dogma of the church.17 She saw at a young age that some things in the world didn't seem morally right. Her father refused to bless her marriage to Henry Stanton for not only was the man branded as a radical abolitionist, Henry offered no visible means of financial support.18 Though later we see her husband and father agree one thing, opposing her plans. She faced her greatest obstacles in the two of them; her husband Henry Stanton stubbornly opposed his wife's desire to join the 1855-1856 canvass to New York, and her father, whom she adored, temporarily disinherited her when she began public lecturing.19 Her convictions only deepened, and she wrote; To think that all in me of which my father would have felt a proper pride had I been a man, is deeply mortifying to him because I am a woman... has stung me to a fierce decision- to speak as soon as I can do myself credit. But the pressure on me just now is too great. Henry sides with my friends, who oppose me in all that is dearest to my heart. They are not willing that I should write even on the woman question. But I will both write and speak.20 Her dedication and unwillingness to give up her beliefs especially with her own father and husband amazes me. ...read more.

Personal and ideological factors linked the two causes. Lucretia Mott and Elizabeth Cady Stanton began as antislavery advocates; but denied access to lecture platforms by abolitionists, they gradually became staunch defenders of women's rights. This transition was a logical one: Both enslaved blacks and married women were "owned" by men, either as property or as their legal dependents.37 The movement's close political relationship with abolitionism further restrained its organizational growth, in that its ability to rely on the organizational resources of the American Anti Slavery Society meant it did not develop on its own. Women's rights articles were published in antislavery newspapers, and its tracts were printed with antislavery funds.38 This caused leaders to indulge their propensities for individualism without risking the entire enterprise. With the help of Susan B. Anthony she culminated in a New York law granting women the right to collect and spend their own wages own property acquired by "trade business, labors or services, "and if widowed to assume sole guardianship of their children."39 Although this seems like a small accomplishment, compared what was to come regarding their fight for suffrage I can only image how these women must of felt gaining these rights, thanks to Susan B. Anthony. Not only did Anthony help start the fight but Lucretius Mott, Elizabeth Cady Stanton, and Lucy Stone helped contribute to the beginning of the reform. Despite their background, or reasons for bringing upon change they all wanted the same thing, equality. With the help of these women, and the guidance with the abolitionism for its constituency, its impossible to estimate how many women were touched by women's rights, and how many of these were abolitionists. Their successes laid the foundation for more aggressive attempts at reform after the civil war. 36 Dubois, Feminism and Suffrage, The Emergence of an Independent Women's Movement in America,42. 37Henretta, James A. et al. America's History 6th edition Volume One to 1877, 359 38 Dubois, Feminism and Suffrage, The Emergence of an Independent Women's Movement in America,51. 39 Henrietta, James A. et al. America's History 6th edition Volume One to 1877, 359. ...read more.