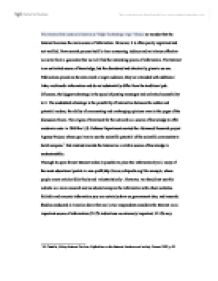 Using Internet Resources for Historical Research. Looking for information on the Internet is helpful to understand the opinions of experts or enthusiasts, which will help to eject their own conclusions to answer the question: Napoleon. Villain or Vision

The twenty-first century is known as "High Technology Age." Hence no wonder that the Internet becomes the main source of information. However, it is often poorly organized and not verified. News search process itself is time consuming, tedious and not always effective-we never have a guarantee that we will find the interesting pieces of information. The Internet is an unlimited source of knowledge, but the disordered and chaotically given to us one. Publications placed on the sites reach a larger audience, they are extended with additional links, multimedia information and do not substantially differ from the traditional pub. Of course, the biggest advantage is the speed of posting messages and unlimited accessibility to it. The undoubted advantage is the possibility of interaction between the author and potential readers, the ability of commenting and exchanging opinions even in the pages of the discussion forum. The origins of treatment for the network as a source of knowledge to offer academic roots: in 1969 the U.S. Defense Department created the Advanced Research project Agency Project, whose goal was to use the scientific potential of the scientific community to build weapons.1 But mistrust towards the Internet as a reliable source of knowledge is understandable. Through its open format Internet makes it possible to place the information by all, many of the most educational portals is non-profit,http://www.wikipedia.org/ for example, where people create articles fully freely and voluntaristically . ...read more.

The website is a political article showing how Napoleon came to his success. It focused on the content describing his maneuvers and what created his reputation of the genius strategist. It is helpful to find the information about his impact on his army as well as relations between them. From this website we learnt about the way he treated opponent and the psychological attitude he used to create in himself before every battle. In the same search engine key words: Napoleon characteristics, help in finding this site: http://www.angelfire.com/vamp/raeya/writing/napoleon.html . A historical article, describing the times of Napoleon's rise. Brief descriptions on battles he took part in. The website is showing Napoleon's impact on France and Europe. This is the historical description of the Napoleon's rise time. Decisions he made and the influences of those decisions. It focused more about what was happening in his head when he was making decisions about his army and battles. The website is showing Napoleon's impact on France and Europe. Using www.google.com and key words: Napoleon as a villain, we can find http://www.fairfield.k12.ct.us/wardehs/cwardehs07/napoleon.htm, http://www.lucidcafe.com/library/95aug/napoleon.html where are described Napoleon's actions towards to France and French people, the power of his approval, historical piece proving the power of Napoleon and why people were believing in himself and his words. ...read more.

Even in the masses of the Russian people woke up nationalism against invaders. For France and finally became the personification of the highest glory and power of the country, including the French who made the 'great nation'.3 Sluchaj Zapis fonetyczny Napoleon was never, in any case, consistently. Bonaparte's speech can at best be illustrated by some of his thoughts and feelings, and actions was often chaotic and contradictory to each other. He was an intelligent pragmatist, and yet indulged in the most unrealistic fantasies. He was one hundred percent opportunist, but sometimes indulged in the network of his own dogma. He was a great cynic, but dreamt a romantic dream. Not driven by any great idea and did not have developed detailed action plan. "4 Opinions about Napoleon will always be divided, but all sources inform us about the Emperor as an outstanding military and strategy extraordinary individual who raises a lot of controversy and contributing to the pursuit of intense discussion. Napoleon is definitely a great individual, and his personage has grown to be an archetype of a great warrior, leader and sort of a romantic hero with head and heart full of values, honor and sacrifice. But above all the information which could be find on the websites Should Not Be used as a main source. We should all look in the primary information sources such as articles in academic journals, as well as textbooks. ...read more.