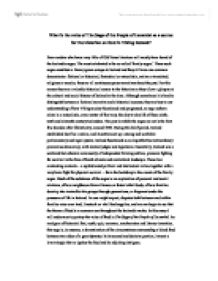 What is the value of The Saga of the People of Laxardal as a source for the historian on feud in Viking Iceland? Even readers who know very little of Old Norse literature will mostly have heard of the Icelandic sagas. The most celebrated is the so-called 'family sagas'. These such sagas constitute a literary genre unique to Iceland and they all have one common denominator: fictional or historical, fantastical or naturalistic, native or translated, religious or secular, they are all continuous prose narratives about the past. For this reason they are a valuable historical source to the historian as they allow a glimpse at the cultural and social history of Iceland at the time. Although sometimes it is hard to distinguish between a fictional narrative and a historical account, they are key to our understanding of how Viking society functioned and progressed, as saga authors relate in a naturalistic, even matter-of-fact way, the day-to-day life of these ninth, tenth and eleventh century Icelanders. The past in which the sagas are set is the first few decades after Christianity, around 1030. During this brief period, Iceland established itself as a nation, and its settlers set up a strong and workable parliamentary and legal system. Iceland functioned as an imperfect but extraordinary precocious democracy, with elected judges and legislators. Essentially, Iceland was a scattered but cohesive community of independent farming settlers, pioneers fighting for survival in the face of harsh climate and recalcitrant landscape. ...read more.

Gudrun comes to the fore now as the main player in the feud and we are informed of devious acts she instigates in a desperate effort to gain the love and affection of Kjartan once more. Going on the advice of his father Olaf, Kjartan opts not to lash out at Gudrun as revenge. Thinking instead of the wider repercussions of such actions. Nevertheless, the seeds of feud were now sown. Events reach their climax when Kjartan stood in the way of Gudrun purchasing some land from a neighbour. This is an ideal example of feud and legality being interlinked. Here we can begin to see the powerful force of a woman come into play as a central theme. Gudrun is using every trick in the book to try to get a rise out of Bolli. She is incredibly cunning and manipulative and it is worth noting here that, Gudrun is given a huge role in this particular feud and many historians view her as central to the saga's epic themes. To varying degrees Gudrun personifies the proud pagan spirit. These issues have lead critics to believe that Gudrun may have been the author of this particular saga. Much is told of her trying to rally support for a counterattack on Kjartan. She is shown to be very influential as she lays attack after attack on Kjartans masculinity, a huge insult to ones honour in Viking Iceland. ...read more.

In this sense, its principal theme centres on disputes and feuds over lands, marriages, divorce settlements and inheritances that culminate in a violent blood feud. Some, such as Snorri, recognise the senselessness of the feud and its destructiveness to the community. Others, namely Gudrun, place their personal codes of honour and lust for revenge far above communal bonds. From this perspective the saga can be categorized as the tragedy of a passing way of life and a shifting moral and social order. Feud stands at the core of the Old Icelandic sagas. They show how the dominant concern of medieval Icelandic society, the channelling of violence into accepted patterns of feud and the regulation of conflict, is reflected in the narrative of the family sagas. Though all the feuds I have mentioned in this essay vary from each other in many ways, they do, however, have a number of important factors in common. It is by finding these recurring themes in these feuds that we begin to see a pattern form. We can see how they develop, how they can be avoided, how they run their course, and even the far-reaching consequences they embody. While they do contain fictional content, they are still a valuable source of information if we follow the course of their events carefully. They paint for us a colourful picture of what it was like to be a part of vibrant Icelandic society. For that reason The Saga of the People of Laxardal is a valuable source of information for the historian of feud in Viking Iceland. ...read more.