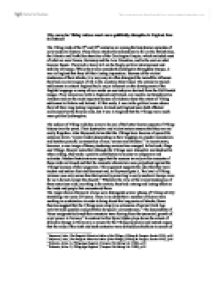 Why were the Viking raids so much more politically disruptive in England than in Ireland? The Viking raids of the 9th and 10th centuries are among the best-known episodes of early medieval history. These fierce attacks from Scandinavia fell on the British Isles, the Atlantic and North Sea shoreline of the Carolingian Empire, which included most of what are now France, Germany and the Low Countries, and to the east on what became Russia. They took a heavy toll on the fragile political development and stability of Europe. While they were considerably disruptive throughout Europe, it was in England that they left their lasting impression. Because of the violent tendencies of their attacks, it is very easy to often disregard the incredible influence they had on every aspect of life in the countries they raided. The extensive Danish settlements in eastern England had a major influence on the development of the English language as many of our words we use today are derived from the Old Danish tongue. Place names too, both in England and Ireland, are owed to our Scandinavian invaders and are the most important source of evidence about the extent of Viking settlement in Britain and Ireland. All this aside, it was in the political arena where they left their long lasting impression. Ireland and England were both affected enormously by the famous raids, but it was in England that the Vikings were much more politically disruptive. ...read more.

Many permanent settlements were made in Ireland and Scotland. The Irish 'who were in a permanent state of anarchic disunity'6 suffered the most during the initial raids. A series of uncoordinated attacks on targets coupled with their inability to organise a sufficient defence force meant that, from the early stages of raiding, they suffered severely. The third phase of Viking activity shows a dramatic shift in focus. The Vikings were adept at exploiting the changing balance of power.7 They were sensitive to political problems and quick to take advantage of them, both in Europe and within its individual kingdoms. Their invasions depended on the political situations and local defences of the countries in which they were interested. With this in mind, they turned their attention to England. For most of the 9th century England had escaped the devastation of the raids that fell on Ireland and Francia. By the mid-ninth century England still comprised of four independent kingdoms; East Anglia, Wessex, Mercia and Northumbria. She was very vulnerable and her attackers knew this. At this point the Vikings were highly mobile forces, moving rapidly around the country. The Northumbrians were preoccupied with a civil war while Mercia on the other hand was rife with political instability caused by 'dynastic change and rivalry'8 and the Vikings exploitation of these situations was to wage successful campaigns. They succeeded in conquering East Anglia, Mercia and Northumbria, demonstrating the ease with which they damaged political structure and control of England. ...read more.

However most settlers did not leave with him but stayed and retained their lands. Men of Scandinavian descent subsequently 'continued to play a prominent part in local affairs in many parts of eastern and northern England.'12 However, their time as total rulers was over. The effects the Vikings had on the political regimes of England and Ireland, and indeed in Europe, are obvious, but an unjustified amount of blame is placed on them for causing political change and disruption. Vikings made a steady income as professional warriors and were often recruited by dissatisfied lords who subsequently harried their kings. This was particularly the case in Ireland and thus they became involved in Irish power politics. Its undeniable that as a result of the pressures and threats from the Vikings the political dynamic of both England and Ireland changed drastically, more so in the case of England. Here, they broke up the existing power structure by eliminating the kingdoms of East Anglia, Northumbria and Mercia. Now the English were forced to look for greater unity under the only remaining Anglo-Saxon kingdom, Wessex. 'When the Danelaw was conquered by Wessex in the 10th century, the English were, for the first time, united under one crown.'13 Aspect of Scandinavian governing styles, such as the importance of noble patronage and the power of the nobility themselves, were introduced. The necessity of military strength and its King was highlighted, as were the advantages of inter-racial alliances. The Scandinavian invasions therefore had introduced and reaffirmed trends and factors that remained significant in Englands political development for many centuries. ...read more.