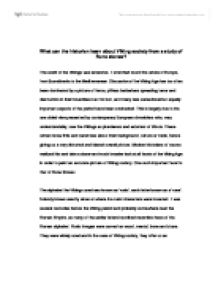 What can the historian learn about Viking society from a study of Rune stones? The world of the Vikings was extensive. It stretched round the whole of Europe, from Scandinavia to the Mediterranean. Discussion of the Viking Age has too often been dominated by a picture of fierce, pitiless barbarians spreading terror and destruction in their boundless lust for loot, and many less sensational but equally important aspects of the period have been overlooked. This is largely due to the one sided view presented by contemporary European chroniclers who, very understandably, saw the Vikings as plunderers and extorters of tribute. These writers knew little and cared less about their background, culture or trade, hence giving us a very distorted and biased overall picture. Modern historians of course realized this and take a closer and much broader look at all facets of the Viking Age in order to paint an accurate picture of Viking society. ...read more.

This not only tells us that the Vikings of the time had the ability to mix and create different colours, but also that they were interested in using this runic method of inscription to tell stories as well as for everyday use. In Gotland one can find many inscribed stones showing fine pictorial designs including many human figures. These show battles, processions, ships in full sail, men on horseback; their meaning is often mysterious, but they are very valuable sources for studying the appearance of men and women, since the realistic representation of human figures is extremely rare in Viking art. Ornamental inscriptions can also be found. These may give the name of a dead man and of the mourner who had the monument erected. On occasion they may even offer details such as the personal qualities of the dead man, his standing in life, and the place and circumstances of his death. Such information can contribute to our understanding of Viking society, though it only occasionally adds a new fact to our historical knowledge. ...read more.

This is not to say, however, that each Viking held true to these virtues. Some inscriptions are done with the sole purpose of naming and shaming certain men who had done wrong. Examples of which can be found on the Isle of Man. Early runic inscriptions such as these are important for a number of reasons. They record early stages of the Scandinavian tongues and so tell us something of the language the Vikings spoke. Their distributions throughout the world is some indication of the geographical areas the Vikings visited. Their content shows us aspects of the Viking Age that are not recorded elsewhere, from them we know how the Vikings saw themselves. From them we can almost visualise what life was like for them. How they traded, operated on a daily basis, how they buried their loved ones and how they communicated with each other. They are vital to our understanding of a society of Vikings which can not reasonably be called primitive, unorganised, or exceptionally cruel, which is often how they are perceived. Through examination of the inscriptions they left us, we can paint a very different picture indeed. ...read more.